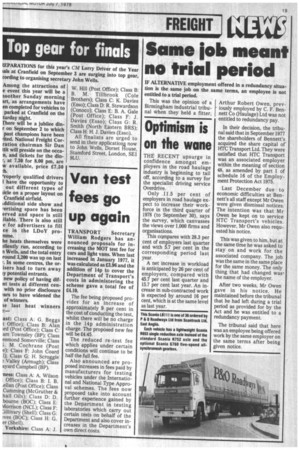 IF ALTERNATIVE employment offered in a redundancy situation is the same job on the same terms, an employee is not entitled to a trial period.

This was the opinion of a Birmingham industrial tribunal When they held a fitter, Arthur Robert Owen, previously employed by C. F. Bennett Co (Haulage) Ltd was not entitled to redundancy pay.

In their decision, the tribunal said that in September 1977 the shareholders of Bennett's acquired the share capital of' HTC Transport Ltd. They were satisfied that HTC Transport was an associated employer within the meaning of section 48, as amended by part 1 of schedule 16 of the Employment Protection Act 1975.

Last December due to economic difficulties at Bennett's all staff except Mr Owen were given dismissal notices. The intention was that Mr Owen be kept on to service HTC Transport's vehicles. However, Mr Owen also requested his notice.

This was given to him, but at the same time he was asked to stay on and work for the associated company. The job was the same in the same place for the same money. The only thing that had changed was the name of the employer.

After two weeks, Mr Owen gave in his notice. He maintained before the tribunal that he had left during a trial period as provided for by the Act and he was entitled to a redundancy payment.

The tribunal said that here was an employee being offered work by the same employer on the same terms after being given notice.