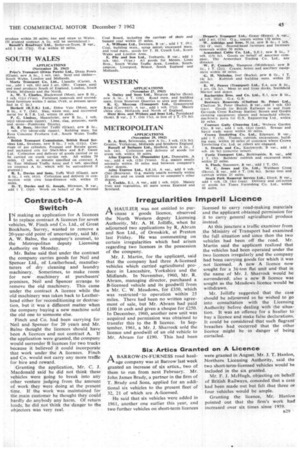 Page 47, 7th December 1962 — Six , Artics Grant ed on A Licence A BARROW-IN-FURNESS road haulI -1
Close
Noticed an error?
If you've noticed an error in this article please click here to report it so we can fix it.
Keywords : Cumbria, Counties Of England, Barrow-in-furness, Furness, Irish Sea, Business / Finance

age company was at Barrow last week granted an increase of six artics., two of them to run from next February. Mr. John James Brady, a partner in the firm of T. Brady and Sons, applied for an additional six vehicles to the present fleet of 32, 21 of which are A-licensed.

He said that six vehicles were added in 1961, another one earlier this year, and two further vehicles on short-term licences were granted in August. Mr. J. T. Hanlon, Northern Licensing Authority, said the two short-term-licensed vehicles would be included in the six granted.

Mr. F. J. McHugh, objecting on behalf of British Railways, conceded that a case had been made out but felt that three or four vehicles would be ample.

Granting the licence, Mr. Hanlon pointed out that the firm's work had increased over six times since 1959.