Buses Against the Flow in London 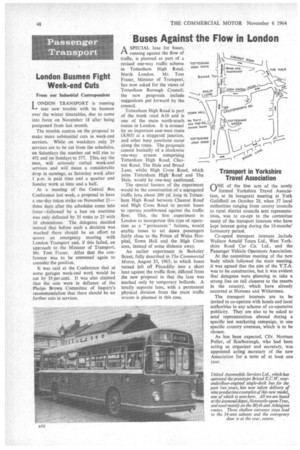 Page 50, 6th November 1964 — Buses Against the Flow in London
Close
Noticed an error?
If you've noticed an error in this article please click here to report it so we can fix it.
Keywords : Transport In London, London, Districts Of England, London Borough Of Haringey, Tottenham, London Buses Route 1, Hospitality / Recreation

A SPECIAL lane for buses,

running against the flow of traffic, is planned as part of a revised one-way traffic scheme in Tottenham High Road, North London. Mr. Tom Fraser, Minister of Transport, has now asked for the views of Tottenham Borough Council; the new proposals include suggestions put forward by the council. Tottenham High Road is part of the trunk road A10 and is one of the main north-south routes in London. It is crossed by an important east-west route (A503) at a staggered junction, and other busy junctions occur along the route. The proposals consist basically of a clockwise one-way System comprising Tottenham High Road, Chesnut Road, The Hale and Broad Lane, whilst High Cross Road, which joins Tottenham High Road and The Hale, would be one-way eastbound. The special feature of the experiment would be the construction of a segregated traffic lane about 200 yd. long in Tottenham High Road between Chesnut Road and High Cross Road to permit buses to operate southbound against the traffic flow. This, the first experiment in London to incorporate this type of operation as a" permanent " feature, would enable buses to set down passengers fairly close to the Prince of Wales Hospital, Town Hall and the High Cross area, instead of some distance away. An earlier experiment in Berkeley Street, fully described in The Commercial Motor, August 23, 1963, in which buses turned left off Piccadilly into a short lane against the traffic flow, differed from the new proposal in that the lane was marked only by temporary bollards. A totally separate lane, with a permanent physical division from the main traffic stream is planned in this ,case,