Microchip holds no fears for workshops 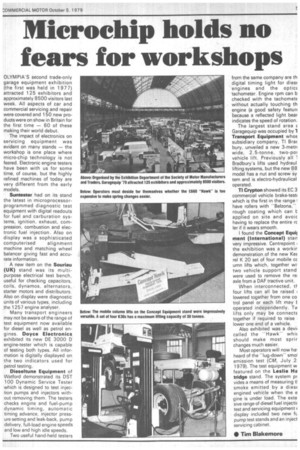 OLYMPIA'S second trade-only garage equipment exhibition (the first was held in 1977) attracted 125 exhibitors and approximately 8500 visitors last week. All aspects of car and commercial servicing and repair were covered and 150 new products were on show in Britain for the first time — 60 of these making their world debut.

The impact of electronics on servicing equipment was evident on many stands — the workshop is one place where micro-chip technology is not feared. Electronic engine testers have been with us for some time, of course, but the highly refined machines of -today are very different from the early models.

Suntester had on its stand the latest in microprocessorprogrammed diagnostic test equipment with digital readouts for fuel and carburation systems, ignition, exhaust, compression, combustion and electronic fuel injection. Also on display was a sophisticated

A new item on the Souriau (UK) stand was its multipurpose electrical test bench, useful for checking capacitors, coils, dynamos, alternators, starter motors and distributors. Also on display were diagnostic units of various types, including the 1 257 engine analyser.

Many transport engineers may not be aware of the range of test equipment now available for diesel as well as petrol engines. Doyce Electronics exhibited its new DE 3000 D engine-tester which is capable of testing both types. All information is digitally displayed on the two indicators used for petrol testing.

• engines and the optic( 'tachometer. Engine rpm can b checked with the tachometE without actually touching th engine (a good safety featuri because a reflected light bear indicates the speed of rotation.

TI Crypton showed its EC 3 commercial vehicle brake-testi which is the first in the range have rollers with "Belzona,'' rough coating which can t applied on site and avoic having to replace the entire rc ler if it wears smooth.

I found the Concept Equip merit (International) stan very impressive. Centrepoint the exhibition was a workir demonstration of the new Kes rel K 20 set of four mobile cc umn lifts which, together wi. two vehicle support stand were used to remove the rei axle from a DAF tractive unit.

When interconnected, tt four lifts can all be raised I lowered together from one co trol panel or each lift may k operated independently. Tvi lifts only may be connectE together if required to raise lower one end of a vehicle.

Also exhibited was a devil called the "Hawk" whir should make most sprir changes much easier.