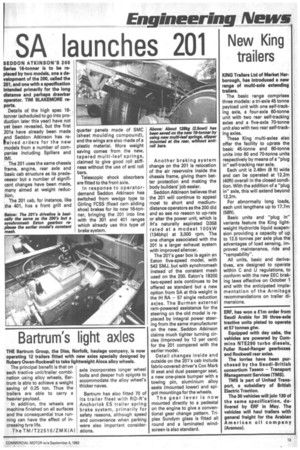 SEDDON ATKINSON'S 200 Series 16-tonner is to be replaced by two models, one a development of the 200, called the 201, and one with a specification Intended primarily for the long distance and perhaps drawbar operator. TIM BLAKEMORE re ports.

Details ot the high spec 16tonner (scheduled to go into production later this year) have not yet been revealed, but the first 201s have already been made and Seddon Atkinson has reIkeived orders for the new models from a number of companies including Spillers and IMI.

The 201 uses the same chassis frame, engine, rear axle and basic cab structure as its predecessor but a number of significant changes have been made, many aimed at weight reduction.

The 201 cab, for instance, like the 401, has a front grill and quarter panels made of SMC (sheet moulding compound), and the wings are also made of a plastic material. More weight saving comes from the new, tapered multi-leaf springs, claimed to give good roll stiffness without the use of anti roll bars.

Telescopic shock absorbers are fitted to the front axle.

In response to operatordemand Seddon Atkinson has switched from wedge type to Girling FCSS (fixed cam sliding shoe) brakes for its new 16-tonner, bringing the 201 into line with the 301 and 401 ranges which already use this type of brake system. Another braking system change on the 201 is relocation of the air reservoirs inside the chassis frame, giving them better protection and making the body builders' job easier.

Seddon Atkinson believes that the 201 will continue to appeal most to short and mediumdistance operators as the 200 did and so see no reason to up-rate or alter the power unit, which is IH's naturally aspirated D358 rated at a modest 100kW (134bhp) at 3,000 rpm. The one change associated with the 201 is a larger exhaust system with improved silencer.

The 201's gear box is again an Eaton five-speed model, with 542 SMJ, but with synchromesh instead of the constant mesh used on the 200. Eaton's 18200 two-speed axle continues to be offered as standard but a new option from SA at this weight is the IH RA — 57 single reduction axles. The Burman external ram-powered assistance for the steering on the old model is replaced by integral power steering from the same manufacturer on the new. Seddon Atkinson claims much tighter turning circles (improved by 12 per cent) for the 201 compared with the earlier model.

Detail changes inside and outside on the 201's cab include fabric-covered driver's Cox Mark III seat and dual passenger seat, a new one-piece bumper with a towing pin, aluminium alloy seats (mounted lower) and spigot mountings for the wheels.

The gear lever is now mounted directly to a pedestal on the engine to give a conventional gear change pattern. Triplex Sundym glass is fitted all round and a laminated windscreen is also standard.