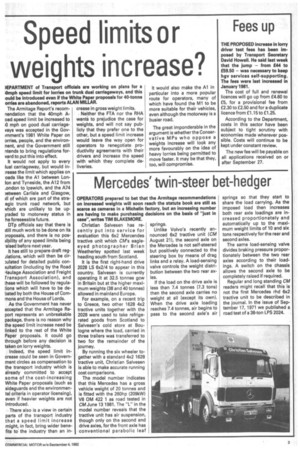 OPERATORS prepared to bet that the Armitage recommendations on increased weights will soon reach the statute book are still as scarce as cameras in a Michelin factory, but an increasing number are having to make purchasing decisions on the basis of "just in case", writes TIM BLAKEMORE.

It is the first right-hand drive 2028 LS 6x2/4 to appear in this country. Salvesen is currently operating it at 32.5 tonnes gcw in Britain but at the higher maximum weights (38 and 40 tonnes) allowed in mainland Europe.

For example, on a recent trip to Greece, two other 1628 4x2 tractive units together with the 2028 were used to take refrigerated goods from Scotland to Salvesen's cold store at Boulogne where the load, carried in three trailers was transferred to two for the remainder of the journey.

By running the six wheeler together with a standard 4x2 1628 tractive unit, Christian Salvesen is able to make accurate running cost comparisons.

The model number indicates that this Mercedes has a gross vehicle weight of 20 tonnes and is fitted with the 280hp (209kW) V8 OM 422 1 as road tested in CM June 13 1981. The "L" in the model number reveals that the tractive unit has air suspension, though only on the second and drive axles, for the front axle has conventional parabolic leaf springs.

Unlike Volvo's recently announced 6x2 tractive unit (CM August 21), the second axle on the Mercedes is not self-steered but positively connected to the steering box by means of drag links and a relay. A load-sensing valve controls the weight distribution between the two rear axles.

If the load on the drive axle is less than 7.4 tonnes (7.3 tons) then the second axle carries no weight at all (except its own). When the drive axle loading reaches 7.4 tonnes, air begins to pass to the second axle's air springs so that they start to share the load carrying. As the imposed load then increases both rear axle loadings are increased proportionately and automatically up to the maximum weight limits of 10 and six tons respectively for the rear and second axles.

The same load-sensing valve divides braking pressure proportionately between the two rear axles according to their loadings. A switch on the chassis allows the second axle to be completely raised if required.

Regular and long standing CM readers might recall that this is not the first Mercedes rhd 6x2 tractive unit to be described in the journal. In the issue of September 17, 1971 we published a road test of a 38-ton LPS 2024.