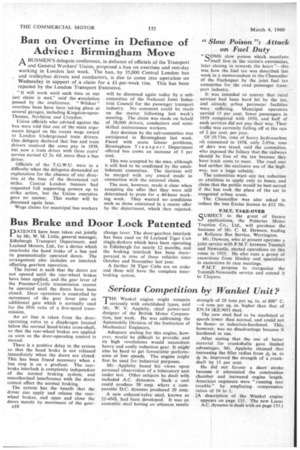 Page 52, 4th March 1960 — "Slow Poison ": Attack on Fuel Duty
Close
Noticed an error?
If you've noticed an error in this article please click here to report it so we can fix it.
Keywords : Business / Finance

a•Jitself first in the victim's extremities, later closing in towards the heart "—this was how the fuel tax was described last week in a memorandum to the Chancellor of the Exchequer by the joint fuel tax committee for the road passenger transport industry.

It was intended to convey that rural services had been hard hit by the tax, and already urban perimeter facilities were suffering. Municipal operators carried 15 per cent. fewer passengers in 1959 compared with 1950, and half of such services did not pay their way. Their traffic was currently falling off at the rate of 2 per cent. per year.

Of 19.73m. tons of heavy hydrocarbon oil consumed in 1958, only 2.05m. tons of dery was taxed, said the committee, who exposed the fallacy that the railways should be free of the tax because they, have" track costs to meet. The road user had neither the exclusive use of the highway, nor nor a huge subsidy.

The committee want any tax reduction or abolition to apply only to buses, and claim that the public would be best served if the bus took the place of the car in congested urban areas.

The Chancellor was also asked to reduce the bus Excise licence to £12 10s.

Mr. Dawson, who at present operates a joint service with P.M.T. between Tunstall and Newcastle, started operations on this route in 1925. He also runs a group of excursions from Hanley and specializes in excursions to race meetings.

P.M.T. propose to reorganize the Tunstall-Newcastle service and extend it to Clayton.