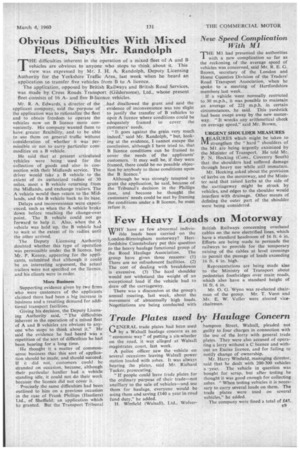 THE difficulties inherent in the operation of a mixed fleet of A and B vehicles are obvious to anyone who stops to think about it. This view was expressed by Mr. I. H. A. Randolph, Deputy Licensing Authority for the Yorkshire Traffic Area, last Week when he heard an application to transfer five vehicles from B to A licence.

Mr. R. A. Edwards, a director of the applicant company, said the purpose of the application was to rationalize the fleet and to obtain freedom to operate the vehicles now on B licence more conveniently. His company wanted them to have greater flexibility, and to be able to use them on general traffic without consideration of whether it was Permissible or not to carry particular commodities on a B vehicle.

He said that at present articulated vehicles were being used for the collection of goods and also in connection with their Midlands service. The driver would take a B vehicle to the extent of its authorized radius of 30 miles, meet a B vehicle returning from the Midlands, and exchange trailers. The A vehicle would then return to the Midlands, and the B vehicle back to its base.

The Deputy Licensing Authority doubted whether this type of operation was permissible under the B licence, but Mr. P. Kenny, appearing for the applicants, submitted that although it could be an interesting argument, the actual trailers were not specified on the licence. and his clients were in order.

More Business Supporting evidence given by two firms who were customers of the applicants claimed there had been a big increase in business and a resulting demand for additional transport facilities.

Giving his decision, the Deputy Licensing Authority said, "The difficulties inherent in the operation of a mixed fleet of A and B vehicles are obvious to anyone who stops to think about it." He said the evidence he had heard Was a repetition of the sort of difficulties he had been hearing for a long time.

He thought it a matter of commonsense business that this sort of application should be made, and should succeed. If it did not, customers could be stranded on occasion, because, although their particular haulier had a vehicle standing idle, it could not do their work because the licence did not cover it.

Precisely the same difficulties had been outlined to him on a previous occasion in the case of Frank Phillips (Hauliers) Ltd., of Sheffield; an application which he granted. But the Transport Tribunal had disallowed the grant and said the evidence of inconvenience was too slight to justify the transfer of B vehicles to open A licence where conditions could be adequately framed to cover the customers' needs.

"It goes against the grain very much indeed:' said Mr. Randolph, "but, looking at the evidence, I cannot escape the conclusion, although I have tried to, that B licence conditions can be framed to cover the needs of the applicants' customers. • It may well be, if they were framed, there could be no possible objection by anybody to those conditions upon the B licence."

Although he was strongly tempted to grant the application, he said, because of the Tribunal's decision in the Phillips case, and because he thought the customers' needs could be met by framing the conditions under a B licence, he must refuse it.