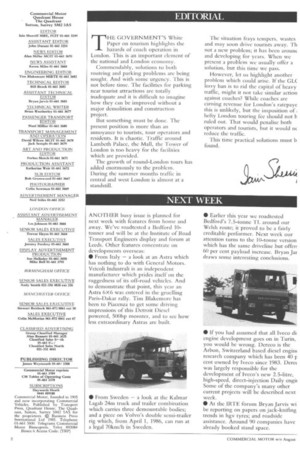 Page 4, 3rd August 1985 — NEXT WEEK
Close
Noticed an error?
If you've noticed an error in this article please click here to report it so we can fix it.
Keywords : Fiat, Iveco, Truck, Astra

ANOTHER busy issue is planned for next week with features from home and away. We've roadtested a Bedford 10tonner and will be at the Institute of Road Transport Engineers display and forum at Leeds. Other features concentrate on developments overseas: • From Italy — a look at an Astra which has nothing to do with General Motors. Veicoli Industrali is an independent manufacturer which prides itself on the ruggedness of its off-road vehicles. And to demonstrate that point, this year an Astra 6 X 6 was entered in the gruelling Paris-Dakar rally. Tim Blakemore has been to Piacenza to get some driving impressions of this Detroit Diesel powered, 500hp monster, and to see how less extraordinary Astras are built.

• From Sweden — a look at the Kalmar Lagab 24m truck and trailer combination which carries three demountable bodies; and a piece on Volvo's double semi-trailer rig which, from April 1, 1986, can run at a legal 70km/h in Sweden. • Earlier this year we roadtested Bedford's 7.5-tonne 'I'L around our Welsh route; it proved to be a fairly creditable performer. Next week our attention turns to the 10-tonne version which has the same driveline but offen 60 per cent payload increase. Bryan Jar draws some interesting conclusions.

• If you had assumed that all Iveco di engine development goes on in Turin, you would be wrong. Dereco is the Arbon, Switzerland based diesel engin( research company which has been 40 p cent owned by Iveco since 1983. Dere( was largely responsible for the development of lveco's new 2.5-litre, high-speed, direct-injection Daily engii Some of the company's many other current projects will be described next week.

• At the IRTE forum Bryan Jarvis wi. be reporting on papers on jack-knifing trends in hgv tyres; and roadside assistance. Around 90 companies have already booked stand space.