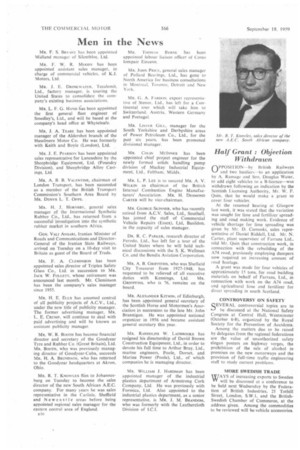 Page 50, 18th September 1959 — Men in the News
Close
Noticed an error?
If you've noticed an error in this article please click here to report it so we can fix it.
Keywords : Business / Finance

MR. L. F. G. HAND lias been appointed the first general fleet engineer of Smedley's, Ltd., and will be based at the company's head office at Whyteleafe.

MR. J. A. TEARE has been appointed manager of the Aldershot branch of the Haselmere Motor Co. He was formerly with Keith and Boyle (London), Ltd.

MR. A. B. B. VALENTINE, chairman of London Transport, has been succeeded as a member of the British Transport Commission's Southern Area Board by MR. DENYS L. T. °PPE.

GEN. VALI ANSARI, Iranian Minister of Roads and Communications and DirectorGeneral of the Iranian State Railways, arrived on Tuesday on a 10-day visit to Britain as guest of the Board of Trade.

MR. F. A. CLEMINSON has been appointed sales director of Triplex Safety Glass Co., Ltd. in succession to MR. JACK W. FoiLerr, whose retirement was announced last month. Mr. Cleminson has been the company's sales manager since 1955.

MR. W. R. BOOTH has become financial director and secretary of the Goodyear Tyre and Rubber Co. (Great Britain), Ltd. MR. BOOTH, who was previously managing director of Goodyear-Cuba, succeeds MR. H. A. BRUNDAGE, who has returned to the Goodyear headquarters at Akron. Ohio.

MR. R. T. KNOWLES flies to Johannesburg on Tuesday to become the sales director of the new South African A.E.C. company. For many years he was sales representative in the Carlisle. Sheffield and Newcastle areas before being appointed regional sales manager for the eastern central area of England.

MR. JOHN PRICE, general sales manager of Pollard Bearings, Ltd., has gone to North America for business consultations in Montreal. Toronto, Detroit and New York, MR. G. A. F.sarmiN. export representative of Stenor. Ltd., has left for a Continental tour which will take him to Switzerland. Austria. Western German!, and Portugal.

MR, LIS I ER GILL. manager for the South Yorkshire and Derbyshire areas of Power Petroleum Co., Ltd., for the past six years, has been promoted divisional manager.

MR. GEORGE SKINNER, Who has recently retired from A.C.V. Sales, Ltd., Southall, has joined the staff of Commercial Vehicle Repairs (Essex), Ltd, Basildon, in the capacity of sales manager.

DR. R. C. PARKER, research director of Ferodo. Ltd., has left for a tour of the United States where he will hold technical discussions with the S. K. Wellman Co. and the Bendix Aviation Corporation.

MR. A. B. GaifFrrits. who was Sheffield City Treasurer from 1927-1948, has requested to be relieved of all executive duties with Kennings, Ltd. MR. Gan7Frrits, who is 76, remains on the board.

MR. ALEXANDER KrrsoN, of Edinburgh, has been appointed general secretary of the Scottish Horse and Motormen's Association in succession to the late Mr. John Brannigan. He was appointed national organizer in 1956 and became assistant general secretary this year.