Tillotson's Coming Back to Haulage 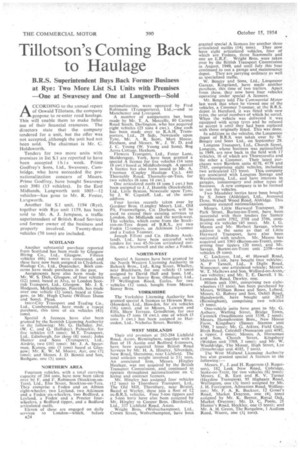 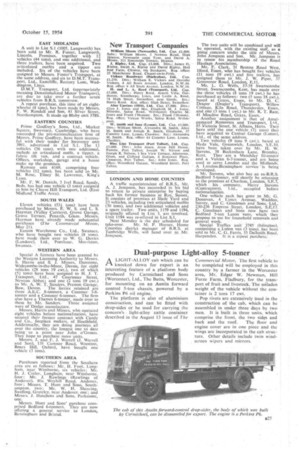 B.R.S. Superintendent Buys Back Former Business at Rye: Two More List Si Units with Premises —One at Swavesey and One at Langworth—Sold

ACCORDING to the annual report of Oswald Tillotson, the company propose to re-enter road haulage. This will enable them to make fuller use of their financial resources. The directors state that the company tendered for a unit, but the offer was not accepted, although the unit had not been sold. the chairman is Mr. C. Holdsworth.

Tenders for two more units with premises in list S.1 are reported to have been accepted this week. Prime Godfrey's Sons, Ltd., Swavesey, Cambridge, who have succeeded the prenationalization concern of Messrs. Prime Godfrey, have bought Swavesey unit 3981 (13 vehicles). In the East Midlands, Langworth unit 1005-12 vehicles—has gone to Mr. R. Foster, Langworth.

Another list S.1 unit. 1194 (Rye), together with Rye unit 1159, has been sold to Mr. A. J. Jempson, a traffic superintendent of British Road Services and former owner of the business and property involved. Twenty-three vehicles (70 tons) are included.

SCOTLAND Another substantial purchase reported from Scotland has been made by Glasgow [-Tiring Co., Ltd., Glasgow. Fifteen vehicles (661 tons) were concerned, and these have now been assigned to Clydebank Haulage Co., Ltd., Duntocher. Both concerns have made purchases in the past. Assignments have also been made by Mr. W. S. Dick, Glasgow, of four vehicles (121 tons), based at Alva, to London Scottish Transport, Ltd., Glasgow. Mr. J. S. Hodgson, Mellcinthorpe, Pen rith, has made over one vehicle (21 tons), based at Glasgow. to Mr. Hugh Clunie (William Dunn and Sons), Plean.

Inter-City Transport and Trading Co., Ltd. Cumbernauld, have made a repeat purchase, this time of six vehicles (431 tons).

NORTHERN AREA Fourteen vehicles, with a total carrying capacity of 264 tons, have now been taken over by F. and F. Robinson (Stockton-onTees), 1.1c1., Elm Street, Stockton-on-Tees. They comprise a Foden and an Albion eight-wheeler, two Leyland, two Atkinson and a Foden six-wheelers, two Bedford, a Leyland, a Foden and a Proctor fourwheelers, a Bedford tipper, and a Bedford articulated outfit.

Eleven of these are engaged on daily services to London—which, before n-14

nationalization, were operated by Fred Robinson (Transporters), Ltd.,—and to Manchester and Liverpool. A number of assignments has been made by Mr. T. A. Metcalfe, 80 Carmel Road South, Darlington, who has acquired eight vehicles (25 tons 4 cwL). One each has been made over to R.A.H. Transporters, Ltd., 28 Side, Newcastle upon Tyne, Mr. A. R. Scott, Mart House, Hexham, and Messrs. W., J. W. D. and J. C. Young (W. Young and Sons), Bog Acres Cottage, Hexham.

Flowers Transport, Ltd., Fetter Lane, Skeldersgate, York, have been granted a special A licence for five vehicles (14 tons 16 cwt.) based at Middlesbrough. A special A licence has also been issued to Mr. A. Freeman (Copley Haulage Co.), 440 Thornably Road, Thornaby-on-Tees, for two vehicles (6 tons 14 cwt.). One articulated outfit (4 tons 1 cwt.) has been assigned to J. J. Humble (Stockstield), Ltd., Little Benton, Newcastle upon Tyne, by J. W. Capstaff, Ltd., of . the same address.

Four lorries recently taken over by Gardner Bros. (Langley Moor), Ltd. Old Pit, Framwellgate, Co. Durham, will be used to extend their existing services to London, the Midlands and the north-west. The vehicles, which came from the Stockton-on-Tees depot of B.R.S., are two Foden 12-tonners, an Atkinson 12-loaner and a Foden 7-tonner, Joseph Elliott and Co. (Bishop Auckland), Ltd., have been successful with tenders for two 45-50-ton articulated outfits, one a Scammell and the other a Foden.

YORKSHIRE The Yorkshire Licensing Authority has granted special A licences to Hewson Bros. (Bowden), Ltd., Bowden, for six vehicles (161 tons), And to Messrs. Lawson and Ellis, Shaw Terrace, Grindleton, for two vehicles (7 tons 18 cwt.), one of which (3 tons 3 cwt.) has been assigned to Har coden, Ltd., Nicholas Street, Burnley. - WEST MIDLANDS Their old premises at 282-284 Lichfield Road, Aston, Birmingham, together with a fleet of 18 Austin and Bedford 6-tonners, have been acquired from British Road Services by Mr. H. A. Hingley, Silverdale, New Road, Shenstone, near Lichfield. The total unladen weight involved is 531 tons. An associated firm, Messrs. klingley Haulage, was not acquired by the British Transport Commission, and continued to operate throughout nationalization on C luring and contract licences.

Mr. Hingley has assigned four vehicles (12 'tons) to Thornbury Transport, Ltd., The Old Mill, Thornhury, near Bristol. Based at Watley, these join a fleet of 12 ex-B.R.S. vehicles. Four 5-ton tippers and a 5-ton lorry have also been assigned by Mr. Hingley to Cooper Bros. (Bordesley), Ltd. 337 Lichfield Road. Aston,

Wright Bros. (Wolverhampton), Ltd., Crown Street, Wolverhampton, have been granted special A licences for another three articulated outfits (14i tons). They now have eight articulated vehicles, four of which are Fodens, three Scammells and one an E.R.F. Wright Bros. were taken over by the British Transport Commission in August, 1949, and until July this year continued to run a garage and maintenance depot. They are carrying ordinary as well as specialized traffic.

W. Bengry and Sons, Ltd., LOngmoor Garage, Kingsland, have made another purchase, this time of two trailers. Apart from these, they now have four vehicles operating under special A licences.

Mr. Bengry told The Commercial Motor last week that when he viewed one of the vehicles, a Commer 7-tonner, at the B.R.S. depot in Hereford, it was fitted with • new tyres, the serial numbers of which he noted. When the vehicle was delivered it was equipped -with scrap tyres and he refused to accept it until they had been replaced with those originally fitted. This was done.

In addition to the vehicles, the Longmoor depot of B.R.S. was taken over by W. Bengry and Sons Ltd.. on September 29.

Longton Transport, Ltd., Church Street., Longton, whose lousiness was nationalized in 1949, are now back in the field with 17 vehicles, 16 of which are Thornycrofts and the other a Comnrier. Their latest purchases were Burslem, units 4178, 4179 and 2585, comprising eight vehicles, including two articulated (23 tons). This company are associated with Longton Storage and Warehousing, Ltd., and have interests in garages, ironmongery and other types of business. A new company is to be formed to run the vehicles.

EAST MIDLANDS A unit in List 5.1 (1005, Langworth) has been sold to Mr. R. Foster, Langworth, Lincoln. Premises, together with 12 vetticles (44 tons), and one additional, and three trailers, have been acquired. Two articulated outfits and a tipper are included. Six of the vehicles have been assigned to Messrs. Foster's Transport, at the same address, and six to D.M.T. Transport, Ltd.. Hasteliffe, Rectory Lane, Waddington, Lincs.

A repeat purchase, this time of an eightwheeler (8 tons), has been made by Messrs. F. W. Randall and Son, 41 Silver Street, Northampton. It made up Biaby unit 3789.

Prime Godfrey's Sons, Ltd., Market Square, Swavesey, Cambridge, who have succeeded the pre-nationalization firm of Messrs. Prime Godfrey, have been successful with their tender for Swavesey unit 3981, advertised in List S.1. The 13 vehicles (36 tons), with one additional, include an articulated outfit, a tipper, a fabric tilt van, and a contract vehicle. Offices, workshop, garage and a house make up the premises.

Special A licences have been granted by the Western Licensing Authority to Messrs. S. Harris and S. J. Miners, Dunstonc, Widecombe-in-the-Moor, Devon, for eight vehicles (28 tons 19 cwt.), two of which (5.2 tons) have been assigned to H. J. T. Transport. Ltd., 47 Courtenay Street, Newton Abbot; and one (2 tons 19 cwt.) to Mr. A. W. 'I'. Sanders, Preston Garage, Bow, Devon. The lorries retained are three A.E.C. 8-tanners, a Commer 7-8tanner and a Commer 6-tonner. The firm also have a Thames 6-tonner, made over to them by Mr. Sanders. Those assigned were of Dodge manufacture.

• Messrs. Harris and Miners, who operated eight vehicles before nationalization, have secured their former contract with Candy and Co.. fireplace makers, of Heathfield. Additionally, they are doing journeys all over the country, the longest one to date being to a point near John &Groats. They hope to purchase more units.

Messrs. Hunt and Sons' purchase comprised Bedford 6-tonners. They are now offering a general service to London, Birmingham and Bristol. LONDON AND HOME COUNTIES A traffic superintendent of 'I.R.S., Mr. A. J. Jempson, has succeeded in his bid to return to private enterprise by buying back his former business at Rye, Sussex. It consists of premises at Slade Yard and 23 vehicles, including two articulated outfits (70 tons), and two additional vehicles and a spare trailer. Two units, 1159 and 1194, originally offered in List 3, arc involved. Unit 1194 was re-offered in List S.1.

Next Monday is the day scheduled for take-over. Mr. M. F. Horner, Home Counties district manager of B.R.S. at Tunbridge Wells, will hand over to Mr. Jempson.

The two units will be combined and will be operated, with the existing staff, as a going concern under the title of Messrs. John Jempson and Son. Mr. Jempson is to renew his membership of the Road Haulage Association.

Ltd., of the same address.

Two 'vehicles (9 tons 9 cwt.), based at Hyde Vale, Greenwich, London, S.E.10, have, taken over by Mr. H. W. Steves, 38 Beckenham Lane, Bromley, Kent. They • are a Mandslay 10-tonner and a. Vulcan 6-7-tonner, and are being used to serve London and the Midlands. A London-Birmingham service is being developed. . Mr. Stevens, who also has an ex,B.R.S. Bedford 5-tonner, will Shortly he returning to the premises at Charlton, London, S.E.7, which his company, Harry Stevens (Contractors), Ltd., occupied before nationalization.

One -vehicle each has gone to Mr. G. Donovan, 4 Lirnei Avenue, Waddon, Surrey, and C. Goodman and Sons,-Ltd., 230-236 Empress Street, London', S.E.17. C. Goodman and Sons now have two Bedford 5-ton Luton vans, which they propose to use for household removals and general work.