That was the year... 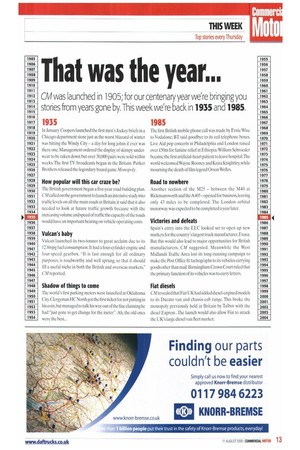 Page 13, 11th August 2005 — That was the year...
Close
Noticed an error?
If you've noticed an error in this article please click here to report it so we can fix it.
Keywords : Transport, Private Transport, Edwardian Era, Fiat, Hatchbacks, Subcompact Cars, Engineering Vehicles

In January Coopers launched the first men's Jockey briefs in a Chicago department store just as the worst blizzard of winter was hitting the Windy City — a day for long johns if ever was there one. Management ordered the display of skimpy underwear to be taken down but over 30,000 pairs were sold within weeks. The first TV broadcasts began in the Britain. Parker Brothers released the legendary board game Monopoly.

How popular will this car craze be?

The British government began a five-year road building plan. CM called on the government to launch an intensive study into traffic levels on all the main roads in Britain; it said that it also needed to look at future traffic growth because with the increasing volume and speed of traffic the capacity of the roads would have an important bearing on vehicle operating costs.

Vulcan launched its two-tanner to great acclaim due to its 12.8mpg fuel consumption. It had a four-cylinder engine and four-speed gearbox. "It is fast enough for all ordinary purposes, is roadworthy and well sprung, so that it should fill a useful niche in both the British and overseas markets," CM reported.

Shadow of things to come

The world's first parking meters were launched in Oklahoma City. Clergyman HC North got the first ticket for not putting in his coin,but managed to talk his way out of the fine claiming he had "just gone to get change for the meter". Ah, the old ones were the best...

Another section of the M25 — between the M40 at Rickmansworth and the A405 — opened for business,leaving only 43 miles to be completed. The London orbital motorway was expected to be completed a year later.

Spain's entry into the EEC looked set to open up new markets for the country's largest truck manufacturer, Enasa. But this would also lead to major opportunities for British manufacturers, CM suggested. Meanwhile the West Midlands Traffic Area lost its long-running campaign to make the Post Office fit tachographs to its vehicles carrying goods other than mail. Birmingham Crown Court ruled that the primary function of its vehicles was to carry letters.

CM revealed that Fiat UK had added diesel-engined models to its Ducat° van and chassis-cab range. This broke the monopoly previously held in Britain by Talbot with the diesel Express . The launch would also allow Fiat to attack the UK's large diesel van fleet market,