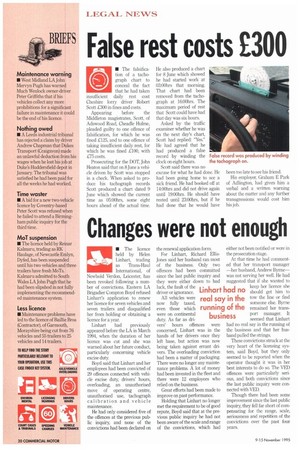 Page 22, 9th November 1995 — False rest costs £300
Close
Noticed an error?
If you've noticed an error in this article please click here to report it so we can fix it.
Keywords : Tachograph, Adswood, Cheadle Hulme

• The falsification of a tachograph chart to conceal the fact that he had taken insufficient daily rest cost Cheshire lorry driver Robert Scott £300 in fines and costs.

Prosecuting for the DOT, John Heaton said that on 8 June a vehicle driven by Scott was stopped in a check. When asked to produce his tachograph records Scott produced a chart dated 9 June which showed the current time as 05:00hrs, some eight hours ahead of the actual time He also produced a chart for 8 June which showed he had started work at 03:00hrs that morning. That chart had been removed from the tachograph at 1600hrs. The maximum period of rest that Scott could have had that day was six hours.

Asked by the traffic examiner whether he was on the next day's chart, Scott had replied: "Yes." He had agreed that he had produced a false record by winding the clock on eight hours.

Scott said there was no excuse for what he had done. He had been going home to see a sick friend. He had booked off at 14:00hrs and did not drive again until 190. Ohrs. He should have rested until 23:00hrs, but if he had done that he would have been too late to see his friend.

His employer, Graham E Park of Adlington, had given him a verbal and a written warning about the matter and any further transgressions would cost him his job.