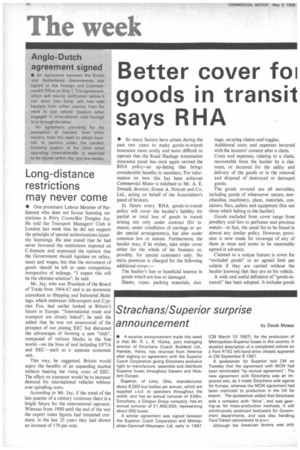 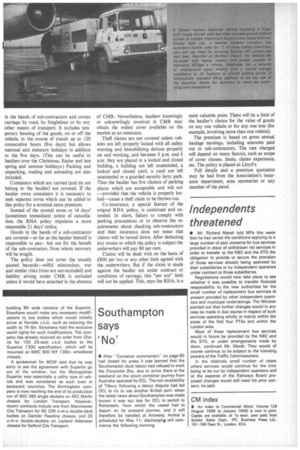 Page 26, 9th May 1969 — Strachans/Superior surprise announcement
Close
Noticed an error?
If you've noticed an error in this article please click here to report it so we can fix it.
Keywords : Buses, Double-decker Buses, Leyland Atlantean, Business / Finance

• A surprise announcement made this week is that Mr. R. L. R. HUlme, joint managing director of Strachans (Coach Builders) Ltd., Hamble, Hants, has returned from America after signing an agreement with the Superior Coach Corporation giving Strachans exclusive right to manufacture, assemble and distribute Superior buses throughout Eastern and Western Europe.

A similar agreement was signed between the Superior Coach Corporation and Metropolitan-Cammell-Weymann Ltd. early in 1967

(CM March 10 1967), for the production of Metropolitan-Superior buses in this country. A detailed description of a completed vehicle on a Ford R192 left-hand-drive chassis appeared in CM September 8 1967.

A spokesman for Superior told CM on Tuesday that the agreement with MCVV had been terminated "by mutual agreement". The new agreement with Strachans was an improved one, as it made Strachans sole agents for Europe, whereas the MCW agreement had been restricted to production in the UK for export. The spokesman added that Strachans was a company with "drive", and was gearing-up for mass-production methods. It still continuously produced bodywork for Government departments, and was also handling Ford Transit conversions to p.s.v.

Although the American factory was only building 8ft wide versions of the Superior, Strachans would make any necessary modifications to bus bodies which would initially arrive at Hamble c.k.d., such as reducing the width to 7ft 6in. Strachans hold the exclusive world rights for such modifications. The company has already received an order from Ghana for 100 25-seat c.k.d. bodies to the Superior 1300 specification, which will be mounted on BMC 600 WF 138in. wheelbase chassis.

A spokesman for MCVV said that he was sorry to see the agreement with Superior go out of the window, but the Metropolitan Superior was essentially a utility type of vehicle and was considered as such even in backward countries. The Birmingham company is now reaching the end of its production run of 650 36ft single deckers on AEC Merlin chassis for London Transport. However, recent contracts include one from Manchester City Transport for 60 33ft o-m-o double-deck bodies on Daimler Fleetline chassis, and 20 o-m-o double-deckers on Leyland Atlantean chassis for Salford City Transport.