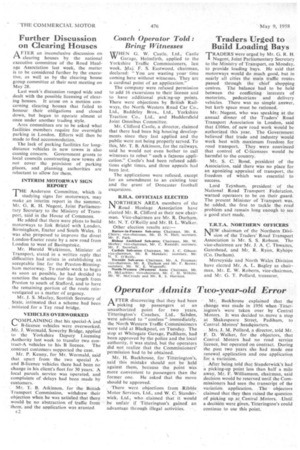 Page 40, 9th May 1958 — Coach Operator Told : Bring Witnesses
Close
Noticed an error?
If you've noticed an error in this article please click here to report it so we can fix it.
Keywords : Business / Finance

WHEN G. W. Castle, Ltd., Castle Garage, Holmfirth, applied to the Yorkshire Traffic Commissioners, last week, Maj. F. S. Eastwood, chairman, declared: "You are wasting your time coming here without witnesses. They are a cardinal point of an application.”

The company were refused permission to add 16 excursions to their licence and to have additional picking-up points. There were objections by British Railways, the North Western Road Car Co., Ltd., Baddeley Bros., Ltd., Yorkshire Traction Co., Ltd., and Huddersfield Joint Omnibus Committee.

Mr. Clifford Castle, a director, claimed that there had been big housing developments since they last applied and the public were not being properly served. To this, Mr. T. B. Atkinson, for the railways, said he would not even bother to call witnesses to rebut "such a fatuous application." Castle's had been refused additions eight times, and three appeals had been lost.

The applications were refused, except for an amendment to an existing toUr and the grant of Doncaster football excursions.

Other election results are:—