Benzole as Motor Fuel in Australia. 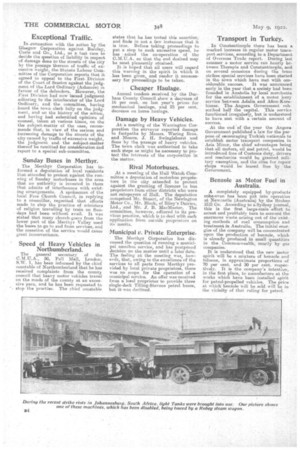 Page 6, 9th May 1922 — Benzole as Motor Fuel in Australia.
Close
Noticed an error?
If you've noticed an error in this article please click here to report it so we can fix it.

A completely equipped by-products coke-oven has been put into operation at Newcastle (Australia) by the Broken Hill Co. According to a Sydney journal, _ this is the first large-soale effort to arrest and profitably turn to account the enormous waste arising out of the existing methods, of coal consumption and treatment in Australia.. The initial energies of the company will be concentrated upon the production of benzole, which is already produced in small quantities in the Commonwealth, mostly by gas companies.

It is understood that the new motor spirit will he a mixture of benzole and toluene, in approximate proportions of 70 per cent. and 30 per cent. respectively. It is the company's intention, in the first place, to manufacture at the works which have been installed spirit for petrol-propelled vehicles. The price at which benzoic will be sold will be in the vicinity of that ruling for petrol.