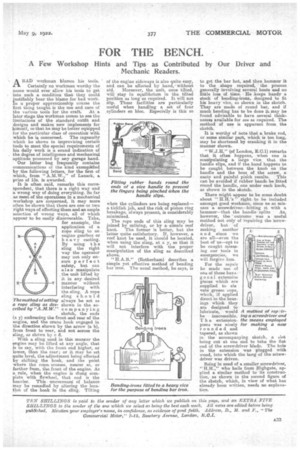 Page 35, 9th May 1922 — FOR THE BENCH. '
Close
Noticed an error?
If you've noticed an error in this article please click here to report it so we can fix it.

A Few Workshop Hints and Tips• as Contributed by Our Driver and Mechanic Readers.

ABAD workman blames his tools. Certainly no workman worthy the name would ever allow his tools to get into such a condition that they could justifiably bear the blame for bad work. In a proper apprenticeship course the first thing taught is the use and care of the various tools for the craft.. At. a later stage the workman comes to see the limitations of the standard outfit. and. designs and makes new implements for himself, so that he may be better equipped for the particular class of operation with which he is concerned. The ingenuity which he shows in improvising certain tools to meet the special requirements of his daily work is a sound indication of the degree of intelligence and mechanical aptitude possessed by any garage hand. Our letter bag frequently contains communications of the kind exemplified by the following letters, for the first of which, from " A.M.W.," of Lanark, a prize of 15s. is awarded.

It is often said, remarks this correspondent, that there is a right way and a wrong way of doing everything. So far as most of the operations in a mechanical workshop are concerned, it may more often be shown that there are one or two right ways of effecting them and an ample selection of wrong ways, all of which appear to be easily discoverable. Take, for example, the application of a rope sling to an engine gearbox or Ii eavy casting. By using the sling the right way the operator naay not only ensure perfect safety, but can a is o manipulate the unit lifted by it in any desired manner without interfering with the sling. A rope sling should The method of setting always be set as a rope sling as desshown in the azcribeel by "A.M.W." eompanying

aketeh, the ends (x y) embracing the front and rear of the engine, and the crane hook engaged in the direction shown 'by the arrow (a b), from front to rear, and not across the sling, as sheavn by c 11.

With a sting used in this manner the engine may be lifted at any angle, that is to say, with the front end higher, or lower, than the rear ; or it May be set quite level, the adjustment being effected by shifting the hook, and the point where the ropei crosses, nearer co, or farther from, the.frent of the engine. As a rule, when the engine is slung complete with flywheel, that end is the heavier. This unevennesg of balance may be remedied by altering the location of the hook in the sling. Tilting of the engine sideways is also quite easy, and can be effected by hand,--without

aid. Moreover, the unit, once tilted, will stay in equilibrium in the tilted position as long as required. It will not BlipThese facilities are particularly useful when handling a set of four cylinders en bloc. Especially is this so

when the cylinders are being replaced— a ticklish job, and the risk of piston ring breakage, always present, is considerably minimized.

The rope ends of this sling may be joined by splicing, or by a sunnIe reef knot,. The former is better, but the latter quite satisfactory. If, however, a reef knot be used, it should be located, when using the sling, at x y, so that it will not interfere with the proper manipulation of the sling as described above.

"H.A.B." (Rotherham) describes a simple yet effective method of bending bar iron. The usual method, he says, is to get the bar hot, and then hammer it to the shape required, the process generally involving several heats and no little loss of time. He keeps handy a stock of bending-irons, designed to fit his heavy vice, as shown in the sketch.

They are made of round bar, and if much bending has to be done it may be found advisable to have several thick, nesses available for ass as required. The method of use is apparent from the sketch.

It is worthy of note that a brake rod, or some similar part, which is too long, may be shortened by cranking it in the manner shown.

"W.J.H." (of London, E.C.1) remarks that it often happens, when one is manipulating a large vice that the handle slips, and if the hand happens to be caught between the knob on the

handle and the boss of the screw, a nasty and painful pinch results. This can be avoided if rubber bands be fitted round the handle, one under each knob, as shown in the sketch.

There might appear to be some doubt about "II.H.'s " right to be included amongst good workmen, since he so mis

uses a senewdrivere–hitting it with a

hammer—that the handle splits As, however, the • outcome was a useful method not only of repairing the iderewdriver, but 'of making another and since we are all—even the best of us—apt to be caught misus ing our tools in emergencies, we will forgive him.

For the repair be made use of

one of those hexagonal extension pieces which are supplied to ale

vats grease 'ales, which, if applied direct to the bearings which they are designed to

lubricate, would A method of rep g irbe inaccessible. jug a screwdriver and T h e extensionthe means employed piece was nicely for making a new rounded and tool. tapered, as shown

in. the accompanying sketch, a slot being cut at one end to take the flat end of the screwdriver blade. The bole in the extension was plugged with wood, into which the tang of the &drewdriver was driven.

Being in used of a smaller screwdriver, " who hails from Highgate, applied a similar method to its construe. tion, as shown in the second figure of the sketch, which, in view of what has already been written, needs no explanation. Q& . ,