A NEW IDEA IN TRAVELLING SHOPS. 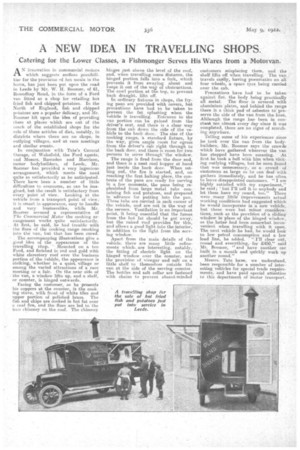 Catering for the Lower Classes, a Fishmonger Serves His Wares from a Motorvan.

AN innovation in commercial motors which suggests endless possibilities for the provision of hot meals in the home, has just been put upon the road in Leeds by Mr. W. II. Boomer, of 61, Ronndhay Road, in the form of a Ford van fitted as a shop for retailing hot fried fish and chipped potatoes. In the North of England, fish and chipped potatoes are a popular delicacy, and Mr. Boomer hit upon the idea of providing them at places which are out. of the each of the established shops for the sale of these articles of diet, -notably, in districts where there are no shops, in outlying villages, and at race meetings and similar events.

In conjunction with Tate's Central Garage, of Wakefield, the Ford agents, and Messrs. Ramsden and Harrison, motor bodybuilders, of Leeds, Mr. Boomer has provided a very ingenious arrangement, which meets OIA need quite as satisfactorily as he anticipated. There have been a number of little difficulties to overcome, as can be imagined, but the result is satisfactory from every point of view. Looking at the vehicle from a transport point of view, it. is smart in appearance, easy to handle and very businesslike, while Mr. Boomer assured a representative of The Commercial Motor the cooking arrangement works quite satisfactorily. At firlit, he said, he had trouble with the flues of We cooking range smoking into the van, but that. has been cured.

The accompanying illustrations give a goodidea of the appearance of the travelling shop. Mounted on a ton Ford, and finished in red and gold with white clerestory roof over the 'business portion of the vehicle, the appearance is striking, whether in a quiet, village or among the varied attractions of a race meeting or a fair. On the near side of the van, a window lifts up, and a shelf, or counter, is hinged outwards.

Facing the customer, as he presents his coppers at the counter, is the cooking stove, with front of white tiles and upper portion of polished brass. The fish and chips are cooked in hot fat over a coal fire, and the flues are led to the iron chimney on the roof. The chimney

hinges just above the level of the roof, and, when travelling some distance, the hinged portion falls into a fork, which prevents it from swaying about and keeps it out of the wav of obstruttions. The cowl portion at the, top, to prevent back draught. lifts off.

In ordinary fixtures in shops, the frying pans are provided with covers, but precautions have had to be taken to prevent the fat splashing when the vehicle is travelling. Entrance to the van portion cart be gained from the driver's seat, and there is a clear way from the cab down the side of the vehicle to the back door. The size of the cooking range, is standard fixture, by the way, gives ample room for egress from the driver's cab right through to the back door, and there is room for two persons to serve through-the window.

The range is fired from the door end, and there is a neat coal hopper at hand just inside the back door. When setting out, the fire is started, and, on reaching the first halting place, the contents of the pans are ready for serving in a few moments, the pans being replenished from large metal tubs containing fish and potatoes, and prepared. in advance for putting into the pan. i These tubs are carried n each corner of the vehicle, and are not in the way of the servers. Ventilation is an important point, it being essential that the fumes from the hot. fat should be got away, but the raised roof provides for this, and allows a good light into the interior, in addition to the light from the serving window.

Apart from the main details of the vehicle, there are many little refinements which. are interesting, notably, the fitting of electric light on f he hinged window over the counter, and the provision of vinegar and salt on a little shelf to themselves outside the van at the side of the serving counter. The bottles and salt cellar are fastened with chains to prevent absent-minded customers misplacing them, and the shelf lifts off when travelling. The van travels easily, having pneumatics on all four wheels, a• spare tyre being carried over the cab.

Precantions have had to be taken against fire:, the body being practically all metal. The floor is covered with aluminium plates, and behind the range there is a thick pad of asbestos to preserve the side of the van from the heat. Although the range has been in constant use almost every day since it was completed, there are no signs of scorching anywhere.

Telling some of his experiences since he took over the van from the body. builders, Mr. Boomer says the crowds which have gathered wherever the van has stopped have been amazing. At first he took a bell with him when visiting outlying villages, but he soon found that was unnecessary, as a crowd of customers as large as lie can deal with gathers immediately, and he has often to leave disappointed customers. " I am highly satisfied with my experiment," he said; but I'll sell it to anybody and let them ha-re my round, too." There were many little improvements actual working conditions had suggested which he would incorporate in a new vehicle, but the were but minor considerations, such as the provision of a sliding window in place of the hinged window, as the latter had been somewhat inconvenient when travelling with it open. The next vehicle he had, he would look to low petrol consumption and a low load line, he added. " I'll clear out, round and everything, for £450," said Mr. Boomer, "and have another car built in a month and quickly work up another round."

Messrs. Tate have, we understand, been responsible for a number of interesting vehicles for special trade requirements, and have paid special attention to this department of motor transport.