SELLING TRANSPORT BY THE MILE. 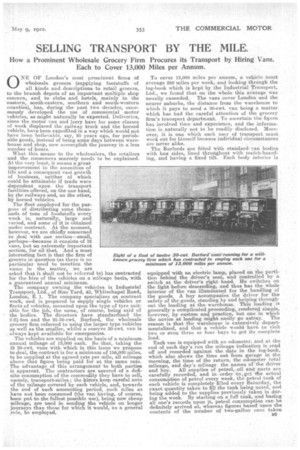 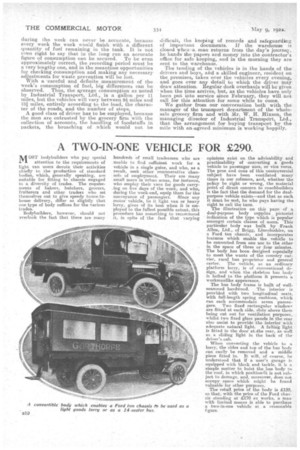 Page 11, 9th May 1922 — SELLING TRANSPORT BY THE MILE.
Close
Noticed an error?
If you've noticed an error in this article please click here to report it so we can fix it.
Keywords : Transport, Private Transport, Electric Cars, Odometer, Tata Indica, Mot Test

How a Prominent Wholesale Grocery Firm Procures its Transport by Hiring Vans, Each to Cover 13,000 Miles per Annum.

ONE OF London's most prominent firms of wholesale grocers (supplying footstuffs of all kinds and descriptions to retail grocers, . to the branch depots of an important multiple shop concern, and to clubs and hotels, mainly in the

eastern, south-eastern, southern and south-western counties), has, during the past two decades, enormously developed the use of commercial motor vehicles as might naturally be expected. Deliveries, since the motor van and lorry have for some classes of work displaced the railway truck and the horsed vehicle, have been expedited in a way which would not have been believable, say, 20 years ago, for perishable goods, instead of being some days between warehouse and shop, now accomplish the journey in a less number of hours.

What this means to the wholesalers, the retailers and the consumers scarcely needs to be explained. At the very least, it means a great improvement in the amenities of life and a consequent vast growth of business, neither of which could be attainable if trade were dependent upon the transport facilities offered, on the one hand, by the railways and, on the other, by horsed vehicles.

The fleet employed for the purpose of distributing some thousands of tons of foodstuffs every week is, naturally, large and 1, aried, and some of it is obtained under contract. At the moment, however, we are chiefly concerned to deal with one section—small, perhaps—'because it consists of 12 vans, but an extremely important section, for all that. And a most interesting fact is that the firm of grocers in question (as there is no particular need to mention the name in the matter, we are asked that it shall not be referred to) has contracted for the hire of the vehicles on a mileage basis, with a guaranteed annual minimum.

The company owning the vehicles is Industrial Transport, Ltd., of Size Yard, 4,3, Whitecha,pel Road, London, E. 1. The company specializes ma contract work, and is prepared to supply single vehicles or fleets of vehicles, mounted upon the type of tyre suitable for the job, the same, of course, being said of the bodies. The directors have standardized the 2-2A-ton and the 25-30-cwt. Burford, the wholesale grocery firm referred to using the larger type vehicles as well as the smaller, whilst a reserve 30-cwt. van is . always kept available for emergencies.

The vehicles are supplied on the basis of a minimumannual mileage of 13,000 each. So that, taking the 12 30-ewt. vans with which in this issue we propose to deal, the contract is for a minimum of 156,000 miles, to be supplied at the agreed rate per mile, all mileage above that figure being paid for at the same rate. The advantage of this arrangement to both parties is apparent. The contractors are assured of a definite consumption of the commodity they have to sell, namely, transport-miles; the hirers keep careful note of the mileage covered by each vehicle, and, towards the end of each accounting period, such miles as have not been consumed (the van having, of course, been put to the fullest possible use), being now cheap mileage, are used in sending the vehicle on longer journeys than those for which it would, as a general rule, be employed.

To cover 13,000 miles per annum, a vehicle must average 250 miles per week, and looking through the log-book which is kept by the Industrial Transport, Ltd., we found that on the whole this average was usually exceeded. The vans cover London and the nearer suburbs, the distance from the warehouse to which it pays to send a 30-cwt. van being a matter which has had the careful attention of the grocery firm's transport department. To ascertain the figure has involved time and experience, and the information is naturally not to be readily disclosed. Moreover, it is one Which each user of transport must work out for himself because individual circumstances ara never alike.

The Burford-s are fitted with standard van bodies with box sides, lined -thrmighout with match-boarding, and having a fixed tilt. Each body interior is

equipped with an electric lamp, placed on the partition behind the driver's seat, and controlled by a switch at the driver's right hand. lie switches on the light before descending, and thus has the whole interior of the van illuminated for the handling of the goods. A boy accompanies the driver for the safety of the goods, standing by and helping throughout the loading at the warehouse. This loading is generally a complicated proceeding, rendered simple, however, by custom and practice, but one in which the novice at loading might easily go astray. The reason is that the warehouse is extensively departmentalized, and that a vehicle would have to visit two or even three or four bays to get its complete load.

Each van is equipped with an odometer, and at the end of each day's run the mileage indication is read off and recorded against the date in the log-book, which also shows the time out from garage in the morning, the time of the return, the odometer total

mileage) and day's mileage the names of driver and boy. All supplies of petrol, ,oil and parts are carefully recorded, and in order totget die actual consumption of petrol every week, the petrol tank of each vehicle is completely filled every Saturday, the exact quantity taken to fill the tank being noted, and being added to the supplies previously taken in during the week. By starting on a full tank, and basing all one's records upon it, petrol consumption can be definitely arrived at, whereas figures based upon the contents of the number of two-gallon cans taken

during the week can never be accurate, because every week the work Would finish with a different quantity of fuel remaining in the tank. It is not ONiell right to say that in the long run an accurate figure of consumption can be secured. To be even approximately correct, the recording period must be a very lengthy one, and in the meantime opportunities for checking consumption and making any necessary adjustments for waste prevention will be lost.

With a 'careful and definite measurement of the week's consumption of fuel, big differences can be observed. Thus, the Nyerage constimpj;ion as noted by Industrial Transport, Ltd., is a gallon per 11 miles, but the vehicles will vary between 91miles and 1:31 miles, entirely according to the -load, the character of the roads, and the number of stops.

A good class of driver has to be employed, because the men are entrusted by the grocery firm with the collection of accounts, tfie handling of foodstuffs in packets, the broaching of which would not be

the keeping of records and safeguarding of important documents. If the warehouse is closed 'when ,a man returns from the day's journey, he bands the papers and money into the contractor's office for safe keeping, and in the morning they are sent to the warehouse.

The tending of the vehicles is in the hands of the drivers and boys, and a skilled engineer, resident on the premises, takes over the vehicles every evening, and goes over any detail to which the driver may draw attention. Regular dock overhauls will be given when the time arrives, but, as the vehicles have only been put into service since February, they will not call for this attention for some while to come.

We gather from our conversation both with the manager of the transport department of the wholesale grocery firm and with Mr. W. H. Hixson, the managing director of Industrial Transpat, Ltd., that the arrangement for buying transport by the mile with an agreed minimum is working happily.