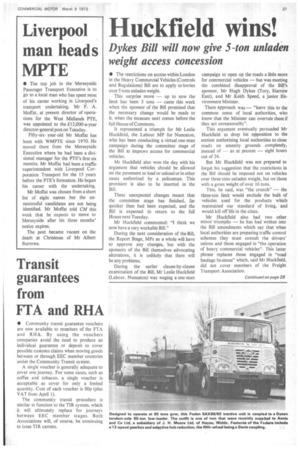 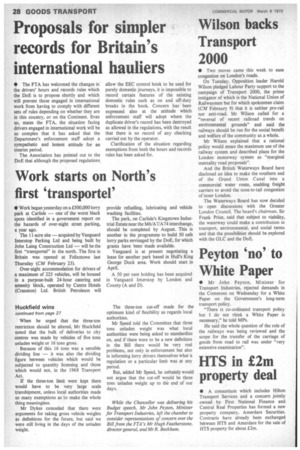 • The restrictions on access within London in the Heavy Commercial Vehicles (Controls and Regulations) Bill are to apply to lorries over 5 tons unladen weight.

This surprise move — up to now the limit has been 3 tons — came this week when the sponsor of the Bill promised that the necessary change would be made to it, when the measure next comes before the full House of Commons.

It represented a triumph for Mr Leslie Huckfield, the Labour MP for Nuneaton, who has been conducting a virtual one-man campaign during the committee stage of the Bill to improve access for commercial vehicles.

Mr Huckfield also won the day with his argument that vehicles should be allowed on the pavement to load or unload or in other cases authorized by a policeman. This provision is also to be inserted in the Bill.

These unexpected changes meant that the committee stage has finished, far quicker than had been expected, and the Bill is expected to return to the full House next Tuesday.

Mr Huckfield commented: "I think we now have a very workable Bill."

During the next consideration of the Bill, the Report Stage, MPs as a whole will have to approve any changes, but with the sponsors of the Bill themselves advocating alterations, it is unlikely that there will be any problems.

During the earlier clause-by-clause examination of the Bill, Mr Leslie Huckfield (Labour, Nuneaton) was waging a one-man campaign to open up the roads a little more for commercial vehicles — but was meeting the combined disapproval of the Bill's sponsor, Mr Hugh Dykes (Tory, Harrow East), and Mr Keith Speed, a junior Environment Minister.

There approach was — "leave this to the common sense of local authorities, who know that the Minister can overrule them if they act unreasonably".

This argument eventually persuaded Mr Huckfield to drop his opposition to the section authorizing local authorities to close roads on amenity grounds completely, instead of — as at present — eight hours Out of 24.

But Mr Huckfield was not prepared to forget his suggestion that the restrictions in the Bill should be imposed not on vehicles over three tons unladen weight, but on those with a gross weight of over 16 tons.

This, he said, was "the crunch" — the three-ton limit would exclude the bulk of vehicles used for the products which maintained our standard of living, and would kill off life in the cities:

Mr Huckfield also had two other minor triumphs — he has had written into the Bill amendments which say that when local authorities are preparing traffic control schemes they must consult the drivers' unions and those engaged in "the operation of heavy commercial vehicles". This latter phrase replaces those engaged in "road haulage business" which, said Mr Huckfield, did not cover members of the Freight Transport Association.

When he urged that the three-ton restriction should be altered, Mr Huckfield noted that the bulk of deliveries to city centres was made by vehicles of five tons unladen weight or 16 tons gross.

Because of this 16 tons was a sensible dividing line — it was also the dividing figure between vehicles which would be subjected to quantity licensing and those which would not, in the 1968 Transport Act.

If the three-ton limit were kept there would have to be very large scale transhipment, unless local authorities made so many exemptions as to make the whole thing meaningless.

Mr Dykes conceded that there were arguments for taking gross vehicle weights as definitions for the future, but said we were still living in the days of the unladen weight. The three-ton cut-off made for the optimum kind of flexibility as regards local authorities.

Mr Speed told the Committee that three tons unladen weight was what local authorities were being asked to standardize on, and if there were to be a new definition in the Bill there would be very real problems, not only in enforcement but also in informing lorry drivers themselves what a regulation or a particular limit was at any period.

But, added Mr Speed, he ceftainly would not argue that the cut-off would be three tons unladen weight up to the end of our days.

While the Chancellor was delivering his Budget speech, Mr John Peyton, Minister for Transport Industries, left the chamber to consider representations of concern over the Bill from the FTA 's Mr Hugh Featherstone, director general, and Mr R. Beckham.