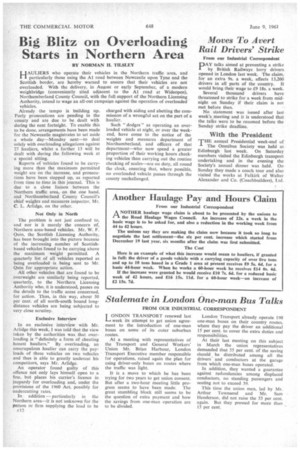 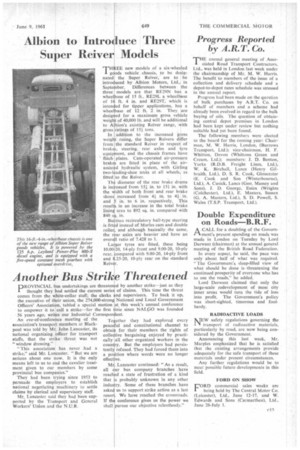 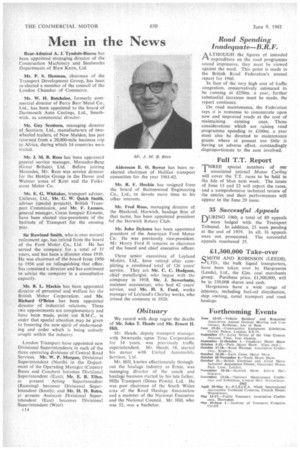 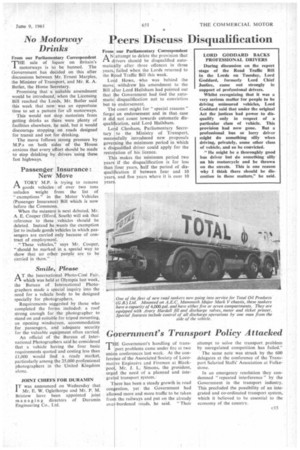 Page 50, 9th June 1961 — Big Blitz on Overloading
Close
Noticed an error?
If you've noticed an error in this article please click here to report it so we can fix it.
Keywords : Transport, Dearborn, Michigan, Ford Motor Company, Land Transport

HAULIERS who operate their vehicles in the Northern traffic area, and particularly those using the Al road between Newcastle upon Tyne and the Scottish border, are hereby warned to ensure that their vehicles are not overloaded. With the delivery, in August or early September, of a modern weighbridge (conveniently sited adjacent to the Al road at Wideopen), Northumberland County Council, with the full support of the Northern Licensing Authority, intend to wage an all-out campaign against the operation of overloaded vehicles.

Already the tempo is building up. Forty prosecutions are pending in the county and are due to be dealt with during the next fortnight. To enable this to be done, arrangements have been made for the Newcastle magistrates to set aside a whole day—Monday next—to deal solely with overloading allegations against 27 hauliers, whilst a further 13 will be dealt with during the following week at a special sitting.

Reports of vehicles found to be carrying more than the maximum permitted weight are on the increase, and prosecutions have been stepped up, as reported from time to time in this journal. This is due to a close liaison between the Northern traffic area, on the one hand, and Northumberland County Council's chief weights and measures inspector. Mr. C. L. Arlidge, on the other.

Not Only in North The problem is not just confined to, and nor is it merely the concern of, Northern area-based vehicles. Mr. W. F. Quin, the Scottish Licensing Authority, has been brought into the picture because of the increasing number of Scottishbased vehicles found to be carrying above the maximum weight permitted. A quarterly list of all vehicles reported as being overloaded is being sent to Mr. Quin for appropriate action.

All other vehicles that are found to be overweight are similarly being reported, quarterly, to the Northern Licensing Authority who, it is understood, passes on the details to the traffic areas concerned, for action. Thus, in this way, about 50 per cent. of all north-south bound longdistance vehicles are being subjected to very close scrutiny.

Exclusive Interview In an exclusive interview with Mr. Arlidge this week, I was told that the view taken by the authorities was that overloading is "definitely a form of cheating honest hauliers." By overloading, an unscrupulous haulier can carry the payloads of three vehicles on two vehicles and thus is able to greatly undercut his competitors, says Mr. Arlidge.

An operator found guilty of this offence not only lays himself open to a fine, but places his carrier's licence in jeopardy for overloading and, under the provisions of the 1960 Act, possibly for undercutting rates.

In addition — particularly in the Northern area—it is not unknown for the person or firm supplying the load to be cl charged with aiding and abetting the commission of a wrongful act on the part of a haulier.

Such " dodges " as operating an overloaded vehicle at night, or over the weekend, have come to the notice of the weights and measures department of Northumberland, and officers of that department—who now spend a greater proportion of their working hours checking vehicles than carrying out the routine checking of scales—are on duty, all round the clock, ensuring that, where possible, no overloaded vehicle passes through the county unchallenged.

From our Industrial Correspondent

PAY talks aimed at preventing a strike by British Railways lorry drivers opened in London last week. The claim, for an extra 9s. a week, affects 13,200

drivers in all parts of the country. It would bring their wage to £9 18s. a week.

Several thousand drivers have threatened to strike for a week from midnight on Sunday if their claim is not met before then.

No statement was issued after last week's meeting and it is understood that the talks were to be resumed before the Sunday strike deadline.

THE annual Presidential week-end of The Omnibus Society was held at Edinburgh last week. On Saturday members visited the Edinburgh transport undertaking and in the evening the Society's annual dinner was held. On Sunday they made a coach tour and also visited the works at Falkirk of Walter Alexander and Co. (Coachbuilders), Ltd.

-riFIE annual general meeting of AssoI ciated Road Transport Contractors, Ltd., was held in London last week under the chairmanship of Mr. M. W. Harris. The benefit to members of the issue of a collection and delivery schedule and a depot-to-depot rates schedule was stressed in the annual report.

Progress had been made on the question of bulk purchases by A.R.T. Co. on behalf of members and a scheme had already been evolved in regard to the bulk buying of oils. The question of obtaining central depot premises in London had been kept under review but nothing suitable had yet been found.

A.CALL for a doubling of the Government's present spending on roads was made in London on Tuesday by Lord Derwent (chairman) at the annual general meeting of the British Road Federation.

In every aspect, he said, the pace was only about half of what was required. "The Government's sleep-filled view of what should be done is .threatening the continued prosperity of everyone who has to use the roads," he added.

Lord Derwent claimed that only the large-scale redevelopment of most city inner areas would turn the tide of loss into profit, The Government's policy was short-sighted, timorous and foolhardy.

NEW safety regulations governing the transport of radioactive materials, particularly by road, are now being considered by the Government.

Announcing this last week, Mr. Marples emphasized that he is satisfied that the existing arrangements provide adequately for the safe transport of these materials under present circumstances.

Any further regulations would be to meet possible future developments in this field.

Men in the News Rear-Admiral A. J. Tyndale-Biscoe has been appointed managing director of the Construction Machinery and Steelworks Departments of Blaw Knox, Ltd.

Mr. P. S. Henntan, chairman of the Transport Development Group, has been re-elected a member of the council of the London Chamber of Commerce.

Mr. Guy Scottorn, managing director of Scottorn, Ltd., manufacturers of twowheeled trailers, of New Malden, has just returned from a 20,000-mile business trip to Africa, during which 14 countries were visited.

Mr. J. M. B. Rees has been appointed general service manager, Mercedes-Benz (Great Britain), Ltd. Before joining Mercedes, Mr. Rees was service director for the Henlys Group in the Dover and Walmer areas of Kent and the Folkestone Motor Co.

Sir Rowland Smith, who is over normal retirement age, has retired from the board of the Ford Motor Co., Ltd. He has served the company for a total of 37 years, and has been a director since 1939. He was chairman of the board from 1950to 1956 and on relinquishing that office. has remained a director and has continued to advise the company in a consultative capacity, Mr. B. L. Mackie has been appointed director of personnel and welfare for the British Motor Corporation, and Mr. Richard O'Brien has been appointed director of industrial relations. These two appointments are complementary and have been made, point out B.M.C., in order that special attention may be given to fostering the new spirit of understanding and order which is being actively sought within the industry.

Alderman E. 0. Bower has been reelected chairman of Halifax transport committee for the year 1961-62.

Mr. R. F. Hockin has resigned from the board of Burtonwood Engineering Co., Ltd., to devote more time to his other interests.

Mr. Fred Rose, managing director of the Blackrod, Horwich, haulage firm of that name, has been appointed president 'of the Harwich Rotary Club.

Mr. John Dykstra has been appointed president of the American Ford Motor Co. He was previously vice-president. Mr. Henry Ford 11 remains as chairman of the board and chief executive officer.

Three senior executives of Leyland Motors, Ltd., have retired after completing a combined total of 126 years' service. They are Mr. C. C. Hodgson, chief, metallurgist, who began with the company in 1918, Mr. .1. Sowerbutts, assistant accountant, who had 42 years' service, and Mr. H. S. Ford, works manager of Leyland's Chorley works, who joined the company in 1920.

Mr. Hill, known affectionately throughout the haulage industry as Ernie, was managing director of the coach and haulage business started by his late father, Hills Transport (Dinas Powis), Ltd. He was past chairman of the South Wales area of the Road Haulage Association and a member of the National Executive and the National Council. Mr. Hill. who was 52, was a bachelor.

A LTHOUGH the figures of intended

expenditure on the road programme sound impressive, they must he viewed against the need. This point is made in the British Road Federation's annual report for 1960.

In face of the very high cost of traffic congestion, conservatively estimated to be running at £250m. a year, further substantial increases must be made, the report continues.

On road maintenance, the Federation says it is nonsense to concentrate upon new and improved roads at the cost of maintaining existing ones. Those considerations which are raising road programme spending to £100m. a year must also be directed to maintenance grants where at present too little is having an adverse effect, outstandingly disproportionate to the sum involved.

THREE special numbers of our associated journal Motor Cycling will cover the T.T. races to be held in the Isle of Man next week. The issues of June 15 and 22 will report the races, and a comprehensive technical review of the entries and their performances will appear in the June 29 issue.

DURING 1960, a total of 89 appeals were lodged with the Transport Tribunal. In addition, 25 were pending at the end of 1959. In all, 16 appeals were not prosecuted. The successful appeals numbered 35.

From our Parliamentary Correspondent

TTosale of liquor on Britain's torways is to be banned. The Government has decided on this after discussions between Mr. Ernest Marplcs, the Minister of Transport, and Mr. R. A. Butler, the Home Secretary.

Promising that a suitable amendment would be introduced, when the Licensing Bill reached the Lords, Mr. Butler said this week that now was an opportune time to set a pattern for all motorways.

This would not stop motorists from getting drinks as there were plenty of facilities elsewhere, he said, but it would discourage stopping on roads designed for transit and not for drinking.

The move follows strong pressure by M.P.s on both sides of the House anxious that every 'effort should be made to stop drinking by drivers using these fast highways.

A TORY M.P. is trying to remove rI goods vehicles of over two tons unladen weight from the list of " exemptions " in the Motor Vehicles (Passenger Insurance) Bill which is now before the Commons.

When the measure is next debated, Mr. A. E. Cooper (Ilford South) will ask that reference to these vehicles should be deleted. Instead he wants the exemption list to include goods vehicles in which passengers are carried only because of contract of employment.

"These vehicles," says Mr. Cooper, "should be marked in a special way to show that no other people are to be carried in them."

Requirements suggested by those who completed the forms included: a roof strong enough for the photographer to stand on and suitable for tripod mounting, an opening windscreen, accommodation for passengers, and adequate security for the valuable equipment often carried.

An official of the Bureau of International Photographers said he considered that a vehicle having the four basic requirements quoted and costing less than £1,000 would find a ready market. particularly among the 25,000 professional photographers in the United Kingdom alone.

JOINT CHIEFS FOR DURAMIN IT was announced on Wednesday that I Mr. E. W. Oglethorpe and Mr. P. M. Bristow have been appointed joint managing directOrs of Duramin Engineering Co., Ltd.