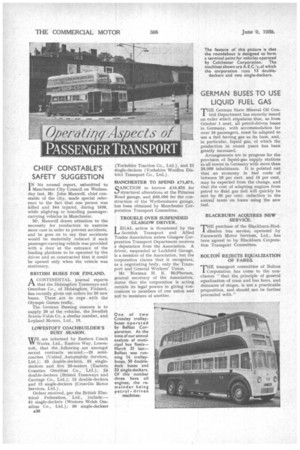 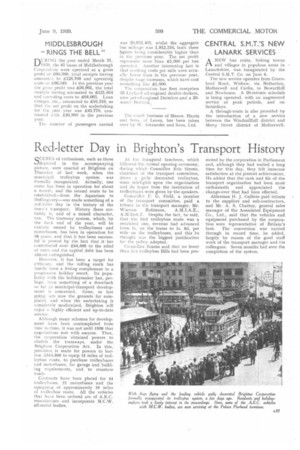 I N his annual report, submitted to Manchester City Council on Wednesday last, Mr. John Maxwell, chief constable of the city, made special reference to the fact that one person was killed and 344 injured, during 1938, while alighting or boarding passengercarrying vehicles in Manchester.

Mr. Maxwell draws attention to the necessity for conductors to exercise more care in order to prevent accidents, and he goes on to say that accidents would be materially reduced if each passenger-carrying vehicle was provided with a door at the entrance of the loading platform to be operated by the driver and so constructed that it could be opened only when the vehicle was stationary.

ACONTINENTAL journal reports that the Helsingfors Tramways and Omnibus Co., of Helsingfors, Finland, has recently given out orders for 50 new buses. These are to cope with the Olympic Games traffic.

The German Bussing concern is to supply 20 of the vehicles, the Swedish Scania-Vabis Co. a similar number, and Leyland Motors, Ltd., 10.

SANCTION to borrow £10,875 for structural alterations at the Princess Road garage, and £65,000 for the construction of the Wythenshawe garage, has been obtained by Manchester Corporation Transport Committee.

LEGAL action is threatened by the Scottish Transport and Allied Trades Association unless Glasgow Corporation Transport Department receives a deputation from the Association. A 'driver, suspended at Larkfield Garage, is a member of the Association, but the corporation claims that it recognizes, as a negotiating body, only the Transport and General Workers' Union.

Mr. Norman H. K. McPherson, general secretary of the Association, states that the corporation is acting outside its legal powers in giving concessions to members of one union and not to members of another.

THE German State Mineral Oil Control Department has recently issued an order which stipulates that, as from October 1 next, all petrol-driven buses in Germany, with accommodation for over 16 passengers, must be adapted to use a fuel having gas as its base, and, in particular, liquid gas, of which the production in recent years has been greatly increased.

Arrangements are in progress for the provision of liquid-gas supply stations in all towns in Germany with more than 20,000 inhabitants. It is pointed out that an economy in fuel costs of between 10 per cent. and 15 per cent. may be expected from the change, and that the cost of adapting engines from petrol to fluid gas fuel will quickly be met by 50 per cent, reduction in the annual taxes on buses using the new fuel.

'THE purchase of the Blackburn-Hod dlesden bus service, operated by Farnworth Motor Services, Ltd., has been agreed to by Blackburn Corporation Transport Committee.

TH.E transport committee of Bolton HE

has come to the conclusion "that the principle of general equalization of tram and bus fares, and distances of stages, is not a practicable proposition, and should not be further proceeded with."

The number of passengers carried was 20,932.403, whilst the aggregate bus naileag,c was 1,912,316, both these figures tieing considerably higher than in the previous year. The net profit represents more than £1,000 per bus operated. Another interesting fact is that working costs per mile were actually lower than in the previous year, despite wage increases, which have cost something like £1,600.

The coach business of Messrs. Harris and Sons, of Leven, has been taken over by W. Alexander and Sons, Ltd.

ANEW bus route, linking towns and villages in populous areas in Lanarkshire, was inaugurated by the Central S.M.T. Co. on June 4.

The new service operates from Greenhead Road, Wishaw, via Netherton, Motherwell and Cat-fin, to Newarthill and Newhouse. A 20-minute schedule is being operated, with an augmented service at peak periods, and on Saturdays.

A through-route is also provided by the introduction of a new service between the Windmillhill district and Merry Street district of Motherwell.