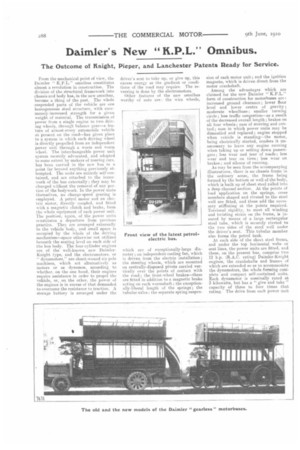 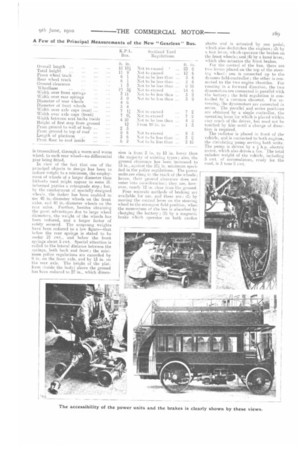 The Outcome of Knight, Pieper, and Lanchester Patents Ready for Service.

From the mechanical point of view, the Daimler " K.P.L." omnibus constitutes almost a revolution in construction. The division of the structural framework into chassis and body has, in the new omnibus, become a thing of the past. The whole suspended parts of the vehicle are one homogeneous steel structure, with enormously-increased strength for a given weight of material. The transmission of power from a single engine to two driving wheels, through balance gear—a feature of almost-every automobile vehicle at, present on the road—has given place to a system in which each driving wheel is directly propelled from an independent power unit through a worm and worm wheel. The interchangeable power unit. system recently advocated, and adopted to some extent by makers of touring cars, has been carried in the new bus to a point far beyond anything previously attempted. The units are entirely self-contained, and are attached to the framework of the bus externally ; they may be changed mahout the removal of any portion of the bodywork. In the power units themselves, no change-speed gearing is employed. A petrol motor and an electric motor, directly coupled, and fitted with a magnetic clutch and brake, form the whole equipment of each power unit. The position, again, of the power units ecnstitutes a departure from previous practice. They are arranged externally to the vehicle body, and small space is occupied by the whole of the driving mechanism—space otherwise not utilized beneath the seating level on each side of the bus body. The four-cylinder engines are of the well-known new DaimlerKnight type, and the electromotors, or " dynamotors," are shunt-wound six-pole machines, which act alternatively as motors or as dynamos, according to whether, on the one hand, their engines require assistance in order to propel the vehicle, or, on the other, the power of the engines is in excess of that demanded to overcome the resistance to traction. A storage battery is arranged under the

driver's seat to take up, or give up, this excess energy as the gradient or condidons of the road may require. The reversing is dune by the electromotors. Other features of the new omnibus worthy of note al's: the wire wheels,

which are of exceptionally-large diameter; an independent cooling fan, which is driven from the electric installation; the steering wheels, which are mounted on centrally-disposed pivots carried vertically over the points of contact with the road ; the front-wheel brakes—these are fitted in addition to a magnetic brake acting on each wormshaft ; the exceptionally-liberal length of the springs; the tubular axles : the separate spring suspen

sion of each motor unit ; and the ignition magneto, which is driven direct from the motor crankshaft.

Among the advantages which are claimed for the new Daimler " K.P.L." form of construction for motorbuses are : increased ground clearance; lower floor level and lower centre of gravity ; moderate wheelbase ; smaller turning circle ; leas traffic congestion—as a result of the decreased overall length ; brakes on all four wheels; ease of steering and control; ease in which power units may be dimautled and replaced; engine stopped when vehicle is standing—the motor, being electrically started, renders it unnecessary to leave any engine running when taking up or setting down passengers; lees wear and tear of roads ; less wear and tear on tires; less wear on brakes ; and silence of running.

As may be seen from the accompanying illustrations, there is no chassis frame in the ordinary sense, the frame being formed by the bottom or well of the body, which is built up of sheet steel rolled into a. deep channel section. At the points of load application on the springs, cross members shaped and riveted to the steel well are fitted, and these add the necessary stiffening at the points required. Torsional rigidity, to meet all winding and twisting strain on the frame, is insured by means of a large rectangular steel tube, which is securely riveted to the two sides of the steel well under the driver's seat. This tubular member also forms the petrol tank. At each side of the sheet steel frame, and under the top horizontal webs or seat lines, the power units are fitted, and these, on the present bus, comprise two 12 h.p. (R.A.C. rating) Daimler-Knight engines, the crankshafts and frames of which are extended so as to accommodate the dynamotors, the whole forming confplete and compact self-contained units. Each dynamotor is nominally rated at 3 kilowatts, but has a "give and take" capacity of three to four times that rating. The drive from each power unit

is transmitted, through a worm and worm wheel, to each rear wheel—no differential gear being fitted.

In view of the fact that one of the principal objects in design has been to reduce weight to a minimum, the employment of wheels of a larger diameter than hitherto used might appear to some illinformed parties a retrograde step ; but, by the employment of specially-designed wheels. the maker has been enabled to use 40 in.-diameter wheels on the front axles. and 48 in.-diameter wheels on the rear axles. Further, besides obtaining the great advantages due to large wheel diameters, the weight of the wheels has been reduced, and a larger factor of safety secured. The unsprung weights have been reduced to a low figure—that below the rear springs is stated to be under 10 cwt., and below the front springs about 5 cwt. Special attention is called to the lateral distance between the springs, both back and front; the minimum police regulations are exceeded by 9 in. on the front axle, and by 15 in. on the rear axle. The height of the platform inside the body) above the ground has been reduced to 27 in., which dimen sion is front 5 in, to 10 in. lower than the majority of existing types; also, the ground clearance has been increased to 15 in., against the 101 in. minimum specified in the police regulations. The power units are siting in the track of the wheels ; hence, their ground clearance does not enter into consideration : they are, however, nearly 12 n. clear from the ground.

Four separate methods of braking are available for use. and these are : (1) by moving the control lever on the steering wheel to the strongest field position, when the momentum of the bus is absorbed by charging the battery ; (2) by a magnetic brake which operates on both cardan

shafts and is actuated by one pedal, v.hich also declutches the engines ; (3) by a foot lever, which operates the brakes on the front wheels; and (4) by a hand lever, which also actuates the front brakes.

For the control of the bus, there are two levers placed on the top of the steering wheel : one is Connected up to the dynamo held-controller ; the other is connected to the tWO engine throttles. For running in a forward direction, the two ds namoters are connected in parallel with the battery ; the field regulatiuo is controlled by a common rheostat. For reversing, the dynamotor* are connected in series. The parallel and series positions are obtained by a single conttoller, the operating lever for which is placed within easy reach of the driver, bin need not be touched by him until a change of direction is required.

The radiator is placed in front of the vehicle, and is connected to both engines, the circulating pump serving both units. The pump is driven by a I h.p electric motor, which also drives a fan. The total unladen weight of the vehicle, including 5 cwt of accumulators, ready for the rend, is 3 tong Ii cwt.