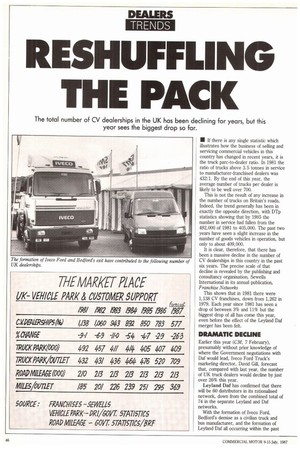 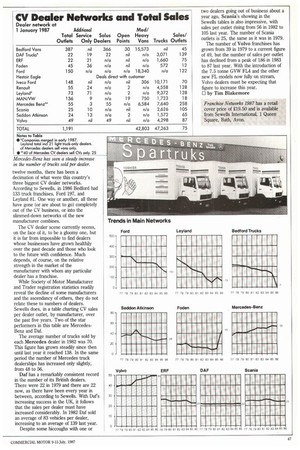 The total number of CV dealerships in the UK has been declining for years, but this year sees the biggest drop so far.

• If there is any single statistic which illustrates how the business of selling and servicing commercial vehicles in this country has changed in recent years, it is the truck parc-to-dealer ratio. In 1981 the ratio of trucks above 3.5 tonnes in service to manufacturer-franchised dealers was 432:1. By the end of this year, the average number of trucks per dealer is likely to be well over 700.

It is clear, therefore, that there has been a massive decline in the number of CV dealerships in this country in the past six years. The precise scale of that decline is revealed by the publishing and consultancy organisation, Sewells International in its annual publication, Franchise Networks This shows that in 1981 there were 1,138 CV franchises, down from 1,262 in 1979. Each year since 1981 has seen a drop of between 3% and 11% but the biggest drop of all has come this year, even before the effect of the Leyland Daf merger has been felt.

Earlier this year (CM, 7 February), presumably without prior knowledge of where the Government negotiations with Daf would lead, Iveco Ford Truck's marketing director, David Gill, forecast that, compared with last year, the number of UK truck dealers would decline by just over 26% this year.

Leyland Daf has confirmed that there will be 60 distributors in its rationalised network, down from the combined total of 74 in the separate Leyland and Daf networks.

twelve months, there has been a decimation of what were this country's three biggest CV dealer networks. According to Sewells, in 1986 Bedford had 133 truck franchises, Ford 197, and Leyland 81. One way or another, all these have gone (or are about to go) completely out of the CV business, or into the slimmed-down networks of the new manufacturer combines.

The CV dealer scene currently seems, on the face of it, to be a gloomy one, but it is far from impossible to find dealers whose businesses have grown healthily over the past decade and those who look to the future with confidence. Much depends, of course, on the relative strength in the market of the manufacturer with whom any particular dealer has a franchise.

While Society of Motor Manufacturer and Trader registration statistics readily reveal the decline of some manufacturers and the ascendancy of others, they do not relate these to numbers of dealers. Sewells does, in a table charting CV sales per dealer outlet, by manufacturer, over the past five years. Two of the star performers in this table are MercedesBenz and Daf.

The average number of trucks sold by each Mercedes dealer in 1.982 was 70. This figure has grown steadily since then until last year it reached 138. In the same period the number of Mercedes truck dealerships has increased only slightly, from 48 to 56.

Daf has a remarkably consistent record in the number of its British dealers. There were 22 in 1979 and there are 22 now, as there have been every year in between, according to Sewells. With Dafs increasing success in the UK, it follows that the sales per dealer must have increased considerably. In 1982 Daf sold an average of 83 vehicles per dealer, increasing to an average of 139 last year.

Despite some hiccoughs with one or two dealers going out of business about a year ago, Scania's showing in the Sewells tables is also impressive, with sales per outlet rising from 56 in 1982 to 105 last year. The number of Scania outlets is 25, the same as it was in 1979.

The number of Volvo franchises has grown from 39 in 1979 to a current figure of 49, but the number of sales per outlet has declined from a peak of 186 in 1983 to 87 last year. With the introduction of the 7.5 tonne GVW FL4 and the other new FL models now fully on stream, Volvo dealers must be expecting that figure to increase this year.