Make sure the sparks won't fly 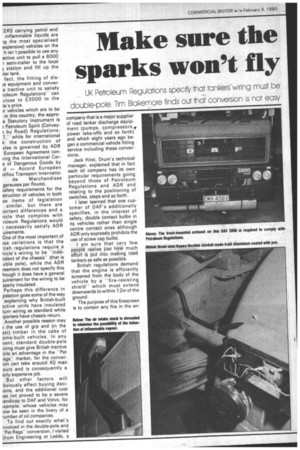 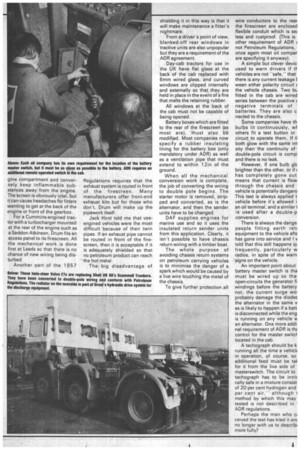 :ERS carrying petrol and inflammable liquids are lg the most specialised expensive) vehicles on the It isn't possible to use any active unit to pull a 6000 semi-trailer to the local j station and fill up the ;tar tank.

fact, the fitting of disle equipment and convera tractive unit to satisfy roleum Regulations" can close to £3000 to the le's price.

Avehicles which are to be in this country, the approe Statutory Instrument is ?Petroleum Spirit (Convey) by Road) Regulations,• 7," while for international

iafety requirements for the struction of vehicles in both se items of legislation similar, but there are )ortant differences and a iicle that complies with roleum Regulations would t necessarily satisfy ADR uirements.

One of the most important of )se variations is that the tish regulations require a hide's wiring to be "indendent of the chassis" (that is uble pole), while the ADR reement does not specify this hough it does have a general luirement for the wiring to be 3perly insulated.

Perhaps this difference in lislation goes some of the way explaining why British-built 3ctive units have insulated turn wiring as standard while Toners have chassis return. Another possible reason may 3 the use of grp and (in the 3 s t ) timber in the cabs of orne-built vehicles. In any vent, standard double-pole .iring must give British tractive nits an advantage in the "Pet egs'' market, for the converon can take around 49 man

u rs and is consequently a irly expensive job.

But other factors will aviously affect buying decions, and the additional cost 3 s not proved to be a severe indicap to DAF and Volvo, for. (ample, whose vehicles may aw be seen in the livery of a imber of oil companies.

To find out exactly what's volved in the double-pole and Pet Begs' conversion, I visited rum Engineering at Leeds, a

company that is a major supplier of road tanker discharge equipment (pumps, compressors,w power take-offs and so forth) and which eight years ago began a commercial vehicle fitting service including these conversions,

Jack Hirst, Drum's technical manager, explained that in fact each oil company has its own particular requirements going beyond those of Petroleum Regulations and ADR and relating to the positioning of switches, steps and so forth.

I later learned that one customer of DAF's additionally specifies, in the interest of safety, double contact bulbs in its vehicles rather than single centre contact ones although ADR only expressly prohibits the use of screw cap bulbs.

I am sure that very few people realise just how much effort is put into making road tankers as safe as possible.

British regulations demand that the engine is efficiently screened from the body of the vehicle by a "fire-resisting shield" which must extend downwards to within 12in of the ground.

The purpose of this firescreen is to contain any fire in the en gine compartment and conversely keep inflammable substances away from the engine. The screen is obviously vital, but it can cause headaches for fitters wanting to get at the back of the engine or front of the gearbox.

Fbr a Cummins-engined tractor with a turbocharger mounted at the rear of the engine such as a Seddon Atkinson, Drum fits an access panel to its firescreen. All the mechanical work is done first at Leeds so that there is no chance of new wiring being disturbed.

Another part of the 1957 Regulations requires that the exhaust system is routed in front of the firescreen. Many manufacturers offer front-end exhaust kits but for those who don't, Drum will make up the pipework itself.

Jack Hirst told me that veeengined vehicles were the most difficult because of their twin pipes. If an exhaust pipe cannot be routed in front of the firescreen, then it is acceptable if it is adequately shielded so that no petroleum product can reach the hot metal.

The big disadvantage of shielding it in this way is that it will make maintenance a fitter's nightmare.

From a driver's point of view, blanked-off rear windows in tractive units are also unpopular but they are a requirement of the ADR agreement.

Day-cab tractors for use in the UK have flat glass at the back of the cab replaced with 6mm wired glass, and curved windows are clipped internally and externally so that they are held in place in the event of a fire that melts the retaining rubber.

All windows at the back of the cab must not be capable of being opened.

Battery boxes which are fitted to the rear of the firescreen (as most are), must also be modified. Most companies now specify a rubber insulating lining for the battery box (only mandatory under ADR) as well as a ventilation pipe that must extend to within 12in of the ground.

When all the mechanical conversion work is complete, the job of converting the wiring to double pole begins. The starter motor is removed, stripped and converted, as is the alternator, and then the sender units have to be changed.

DAF supplies engines for marine use and so it uses the insulated return sender units from this application. Clearly, it isn't possible to have chassis return wiring with a timber boat.

The whole purpose of avoiding chassis return systems on petroleum carrying vehicles is to minimise the danger of a spark which would be caused by a live wire touching the metal of the chassis.

To give further protection all wire conductors to the rear the firescreen are enclosed flexible conduit which is sei less and rustproof. (This is other requirement of ADR not Petroleum Regulations, once again most oil camper are specifying it anyway).

A simple but clever devio used to warn drivers if vehicles are not "safe," that there is any current leakage E ween either polarity circuit the vehicle chassis. Two bu fitted in the cab are wired series between the positive .1 negative terminals of • batteries. They are also c nected to the chassis.

Some companies have th bulbs lit continuously, vvf others fit a test button in circuit to operate them. If tl both glow with the same int sity then the continuity of double-pole circuit is compl and there is no leak.

However, if one bulb glc brighter than the other, or if c has completely gone out means that current is flow through the chassis and • vehicle is potentially danger° This test is always applied t vehicle before it's allowed i an oil terminal, and a similar is used after a double-p conversion.

There is always the dange people fitting earth reti equipment to the vehicle afte has gone into service and I v told that this still happens qt. frequently, particularly w radios, in spite of the warn signs on the vehicle.

An important point about battery master switch is tha must be wired up so tha• open-circuits the generator fi windings before the battery not, the current surge we' probably damage the diodes the alternator in the same v as is likely to happen if a batt is disconnected while the eng is running on any vehicle v% an alternator. One more addi nal requirement of ADR is thz control for the master switch located in the cab.

A tachograph should be k running all the time a vehicli in operation, of course, so additional feed must be tal. for it from the live side of masterswitch. The circuit to tachograph has to be intrir cally safe in a mixture consist of 20 per cent hydrogen and per cent air," although 1 method by which this may tested is not described in • ADR regulations.

Perhaps the man who ci ceived the test has tried it am no longer with us to describi more fully?