So Long at the Fair 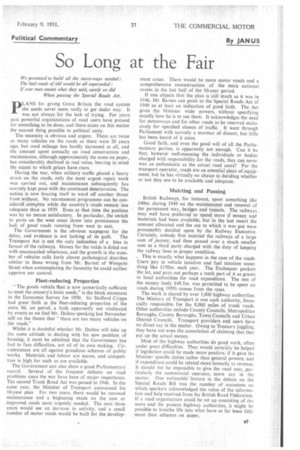 We promised to build all the motorways needed: The bad roads of old would be all superseded : If ever men meant what they said, surely we did When passing the Special Roads Act.

pLANS for giving Great Britain the road system she needs never seem really to get tinder way. It was not always for the lack of trying. For years past powerful organizations of road users have pressed for something to be done, and there exists on this matter the nearest thing possible to political unity.

The necessity is obvious and urgent. There are twice as many vehicles on the roads as there were 20 years ago, but road mileage has hardly increased at all, and the amount spent annually on road construction and maintenance, although approximately the same on paper, has considerably declined in real value, bearing in mind the extent to which prices have risen.

During the war, when military traffic placed a heavy strain on the roads, only the most urgent repair work was carried out, and maintenance subsequently has scarcely kept pace with the continued deterioration. The nation is now bracing itself to ward off another threat from without. No rearmament programme can be considered complete while the country's roads remain less adequate than in 1939. Even at that time the position was by no means satisfactory. In particular, the switch to ports on the west coast threw into prominence the lack of good roads running from west to east, The Government is the obvious scapegoat for the delay, and evidence is not lacking of its guilt. The Transport Act is not the only indication of a bias in favour of the railways. Money for the roads is doled out with unconcealed reluctance, and the growth in the number of vehicles calls forth almost pathological diatribes similar to those wrung from Mr. Barrett of Wimple Street when contemplating the fecundity he could neither approve nor control.

" The goods vehicle fleet is now numerically, sufficient to meet the country's basic needs," is the bleak statement in the Economic Survey for 1950. Sir Stafford Cripps had great faith in the fleet-reducing properties of the extra 9d. on petrol, a faith apparently not vindicated by events as we find Mr. Dalton speaking last November still on the theme that "there are too many vehicles on the roads."

Whilst it is doubtful whether Mr. Dalton will take up the same attitude in dealing with his new problem of housing, it must be admitted that the Government has had to face difficulties, not all of its own making. Circumstances are all against grandiose schemes of public 'works. Materials and labour are scarce, and competition is high for such as are available.

The Government can also show a good Parliamentary record. Several of the frequent debates on road problems since the war have been of major importance. The second Trunk Road Act was passed in 1946. In the same year, the Minister of Transport announced his 10-year plan For two years, there would be renewed maintenance and a beginning made on the new or improved roads most urgently needed: The next three years would see an increase in activity, and a small number of motor roads would be built for the develop

ment areas. There would be more motor roads and a comprehensive reconstruction of the main national routes in the last half of the 10-year period.

If one objects that the plan is still much as it was in 1946, Mr. Barnes can point to the Special Roads Act of 1949 as at least an indication of good faith. The Act gives the Minister wide powers, without specifying exactly how he is to use them. It acknowledges the need for motorways and for other roads to be reserved exclusively for specified classes of traffic. It went through Parliament with scarcely a murmur of dissent, but little has been heard of it since.

Good faith, and even the good will of all the Parliamentary parties, is apparently not enough. Can it be that, however well-meaning the individuals or bodies charged with responsibility for the roads, they can never wax as enthusiastic as the actual road users? For the transport operator, roads are an essential piece of equipment, but he has virtually no choice in deciding whether or not they are to be available and adequate.

Mulcting and Passing British Railways, for instance, spent something like £40m. during 1949 on the maintenance and renewal of the permanent way,, bridges and tunnels. The railways may well have preferred to spend more if money and Materials had been available, but in the last resort the amount allocated and the use to which it was put were presumably decided upon by the Railway Executive. Certainly, nobody first mulcted the railways of a large sum of /money, and then passed over a much smaller sum to a third party charged with the duty of keeping the railway lines in proper condition.

-This is exactly what happens in the case of the roads. Users pay in vehicle taxation and fuel taxation something like £150m. each year. The Exchequer pockets the lot, and pays out perhaps a tenth part of it as grants to local authorities for road expenditure. The rest of the money (only £48.5m. was permitted to be spent on roads during 1950) comes from the rates, The work is shared by over 1,000 highway authorities. The Ministry of Transport is one such authority, financially responsible for the 8,000 miles of trunk roads Other authorities include County Councils, Metropolitan Boroughs, County Boroughs, Town Councils and Urban District Councils. Transport providers and users have no direct say in the matter. Owing to Treasury juggling, they have not even the consolation of claiming that they put up the actual money.

Most of the highway authorities do good work, often

under great difficulties. They would certainly be helped if legislation could be made more positive, if it gave the Minister specific duties rather than general powers: and if expenditure could be related more honestly to revenue. It should trot be impossible to give the road user, particularly the commercial operator, more say in the matter. One noticeablefeature in the debate on the Special Roads Bill was the number of occasions on which speakers acknowledged the value of the information and help received from the British Road Federation. If a road organization could be set up consisting of the users and the present highway authorities, it might be possible to breathe life into what have so far been little more than schemes on paper.