Exhibitions and the Bond. 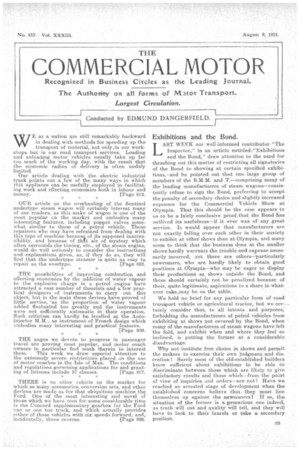 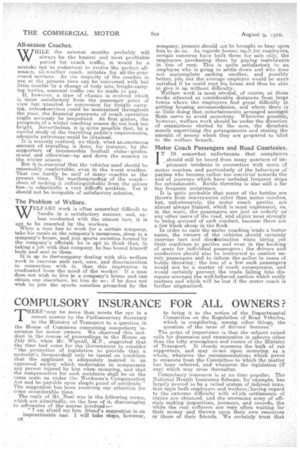 Page 1, 9th August 1921 — Exhibitions and the Bond.
Close
Noticed an error?
If you've noticed an error in this article please click here to report it so we can fix it.

LAST WEEK our well-informed contributor "The Inspector," in a.n article entitled,"Exhibitions and the Bond," drew attention to the need for thrashing out this matter of restricting all signatories of the Bond to showing at certain specified exhibitions, 'and he pointed out that one large group of members of the S.M.M. and T..—comprising many of the leading manufacturers of steam wagons--consistently refuse to sign the Bond, preferring to accept the penalty of secondary choice and slightly increased expenses for the Commercial Vehicle Show at Olympia. That this should be the ease appears to us to be a fairly conclusive proof.that the Bond has outlived its usefulness—if it ever was of any great service. It would appear that manufacturers are not exactly falling over each other in their anxiety to exhibit at other' shows than at Olympia, and many seem to think that the business done at the smaller shows hardly warrants the trouble and expense necessarily incurred, yet there are others—varticularly newcomers, who are hardly likely to obtain good positions at Olympia—who may be eager to display their productions at shows outside the Bond, and these should certainly not be penalized because of their, quite legitimate, aspirations to a share in whatever cakenaay be on the table.

We hold no brief for any particular form of road transport vehicle or agricultural tractor, but we eer— tainly consider that, to all intents and purposes,forbidding the manufacturers of petrol vehicles from exhibiting at shows not coveredby the Bond, when many of the manufacturers of steam wagons have left the fold, and exhibit when and where they feel so inclined, is putting the former at a considerable disadvantage.

Why not institute free: choice in shows and permit the makers to exercise their own judgment and discretion? Surely most of the old-established builders know sufficient about exhibitions to be able to discriminate between those which are likely to give satisfactory results and those which—from the point of view of inquiries and orders—are not? Have we reached an arrested stage of development when the established concerns believe that they must line themselves up against the newcomers? If so, this situation of the former is a precarious one indeed, as truth will out and quality will tell, and they will have to look to their laurels or take a secondary position. WHILE the suinmer. months probably will always be the busiest and most profitable period for 'coach traffic, it would be a mistake not to endeavour to evolve the perfect allseason, all-weather coach, suitable for all-the-yearround services. As the majority of the coaches in use at the present time can be convertedwith but little trouble by a change of body into freight-carrying lorries, seasonal traffic can be made to pay. if, however' a type of chassis is 'evolved which is more satisfactory from the passenger point of view but unsuited to conversion for freight carrying, enlessiservices could be maintained throughout the year, the financial prospects of coach operation might seriously be prejudiced. At first glance, the prospects of a winter coaching season do not look too bright. Nevertheless, it is quite possible that, by a careful study of the travelling public's requirements, adequate patronage could be obtained. It is scarcely realized, Ive-think, whatareenormous amount of travelling is done, for instance, by the supporters Of innumerable football clubs—professional and otherwise—up and down the country in the winter season:

But itis,essential that the vehicles used should be reasonably comfortable, even in the worst weather. That can hardly be said of many.coaclees at the present time. The weatherproofing of the coach— short of making it indistinguishable from the saloon bus—is admittedly a very difficillt problem. Yet it should not be incapable of satisfactory solution,

The Problem of Welfare.

WELFARE work is 'often somewhat difficult to handle in a; satisfactory manner, and, unless conducted with the utmost tact, it is apt tobe resented by the workers. When a man has to work for a certain company, take his meals at the company's messroom, sleep in a eompany'e.house, and join sports societies formed by the company's officials, he as apt to think that, in taking a job with that company, he has bound himself body and .solit to them. ' •

It is up to theecompany'dealing with this. welfare work to exercise such tact, care, and discrimination in connection with it, that this impression is eradicated from the mind of the worker. If a man does not wish to live in a company's lionise and can obtain, one elsewhere, let him do so; if he does not wish to join the sports -societies promoted by the

company, pessure should eot be hrought to bear upon him 'to do so. As regards houses /milt for employees, certain concerns have built these for sale only, the employees purchasing them by payinginstalments in lieu of rent. This is quite satisfactoiyto an. employee who is going to settle down and who does not contemplate seeking another, and possibly better, job, but the average employee would be More satisfied if he could rent his house and thus be able to give it up without difficulty.

Welfare work is most needed, of course, at those works situated at considerable distances from large towns where the employees find great. difficulty in getting housing accommodation, and where there is so little doing that entertainments arranged amongst them serve to avoid monotony. Wherever possible, however, welfare work should be under the direction • of committees elected by the men, the directors merely supervising the arrangements and stating the amount of money which they are prepared to allot to the welfare branch.

IT IS somewhat unfortunate that complaints , should still be heard from many quarters of unpleasant incidents in connection with users of motor coaches, and particularly of the behaviour of parties who become rather too convivial towaras the end of journeys which-have included frequent stops, for refreshments. Bottle throwing is also still a far too frequent occurrence.

It is quite probable that. many of the bottles are thrown from conveyances other than motor coaches, but, unfortunately, the motor coach parties are almost always blamed, which is most unpleasant, as, in the main, the passengers% are just as orderly as any other users of the road, and object most strongly to being accused of such conduct, because there are a few black sheep in the flock. ,

In order to earn the motor coaching trade a better name, the owners of the vehicles _should certainly exercise tact and disciimination when hiring out their machines to parties and even in the booking of seats for individual passengers; the drivers and conductors should also. be instructed to caution unruly passengers and to inform the police in cases of bottle throwing; the loss of a few such passengers would not be a matter of much consequence, and would certainly prevent the trade failing into, disrepute amongst -the well-behaved section which really matters and which will be lost if the motor coach is further stigmatized.