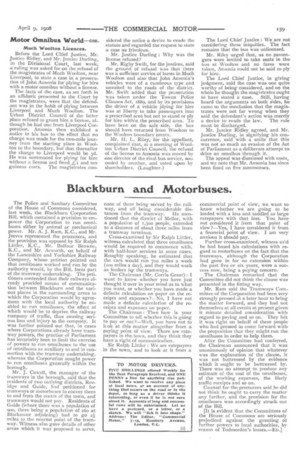 Page 9, 9th April 1908 — Blackburn and Motorbuses.
Close
Noticed an error?
If you've noticed an error in this article please click here to report it so we can fix it.
Keywords : Light Rail, Tram, Nottingham, Nottingham And District Tramways Company Limited, Business / Finance

The Police and Sanitary Committee of the House of Commons considered, last week, the Blackburn Corporation Bill, which contained a provision to empower the Corporation to run omnibuses either by animal or mechanical power. Mr. A. J. Ram, K.C., and Mr. Jeeves represented the promoters, and the provision was opposed by Sir Ralph Littler, K.C., Mr. Balfour Browne, K.C., and Mr. Acworth, on behalf of the Lancashire and Yorkshire Railway Company, whose petition pointed out that omnibuses worked and run by the authority would, by the Bill, form part of the tramway undertaking. The petitioners contended that their railways already provided means of communication between Blackburn and the various places in the surrounding areas to which the Corporation would by agreement with the local authority be enabled to run omnibuses, the effect of which would be to deprive the railway company of traffic, thus causing serious loss and injury to the company. It was further pointed out that, in cases where Corporations already have tramway powers, the practice of Parliament has invariably been to limit the exercise of powers to run omnibuses to the use of omnibuses as auxiliary to and in connection with the tramway undertaking, whereas the Corporation sought power to run omnibuses generally within the borough. Mr. J. Cowell, the manager of the tramways in the borough, said that the residents of two outlying districts, Revidge and Guide, had petitioned for tramways or motorbuses to convey them to and from the centre of the town, and tramways would not pay. Residents of Guide (where there was a population of goo, there being a population of 260 at Blackmoor adjoining) had to go 21 miles to the nearest point of the tramway. Witness also gave details of other areas which it was proposed to serve, none of them being served by the railway, and all being considerable distances from the tramway. He mentioned that the district of Mellor, with a population of 1,300 people, extended to a distance of about three miles from a tramway terminus.

Cross-examined by Sir Ralph Littler, witness calculated that three omnibuses would be required to commence with, with half-hour services in some cases. Roughly speaking, he estimated that the cars would run via miles a week (too miles a day), and they would work as feeders fvthe tramways.

The Chairman : Then how is your Committee to tell whether this is going to pay or not?—Well, you have not to Icok at this matter altogether from a paying point of view. There are ratepayers in the town, and they think they have a right of communication.

Sir Ralph Littler : We are ratepayers in the town, and to look at it from a

Further cross-examined, witness said he had based his calculations with regard to motorbuses on the fact that the tramways, although the Corporation had gone in for no extension within the past five or six years, were a success now, being a paying concern.

The Chairman remarked that the Committee did not think the clause was presented in the fitting way. Mr. Ram said the Tramways Committee of the Corporation had been very strongly pressed at a later hour to bring the matter forward, and they had not themselves at all events at present given it minute detailed consideration with regard to paying and so on. They felt it was right on behalf of these people who had pressed to come forward with the proposition that they might run the omnibuses in order to help them. After the Committee had conferred, the Chairman announced that it wasunanimously of opinion that whatever was the explanation of the clause, it was not buttressed by the evidence which it ought to be buttressed by. There was no attempt to produce any estimate of the cost of the omnibuses, of the working expenses, the likely traffic receipts and so on. Counsel for the promoters said he did not think he ought to carry the matter any further, and the provision for the omnibuses was accordingly struck out of the Bill.

[It is evident that the Committees of the House of Commons are seriously prejudiced against the granting of further powers to local authorities, by reason of Todmorden's losses.—ED.].