A BLOW FOR EFFI CIENCY 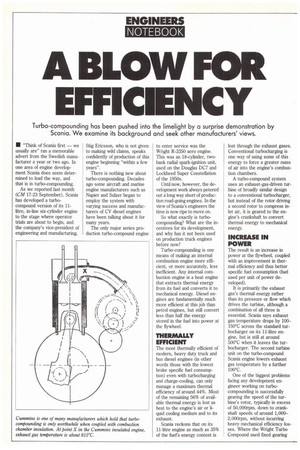 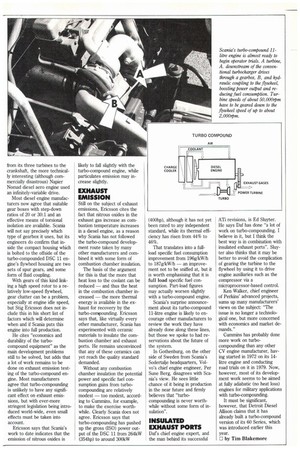 Turbo-compounding has been pushed into the limelight by a surprise demonstration by Scania. We examine its background and seek other manufacturers' views.

• 'Think of Scania first — we usually are" ran a memorable advert from the Swedish manufacturer a year or two ago. In one area of engine development Scania does seem determined to lead the way, and that is in turbo-compounding.

As we reported last month (CM 17-23 September), Scania has developed a turbocompound version of its 11litre, in-line six-cylinder engine to the stage where operator trials are about to begin, and the company's vice-president of engineering and manufacturing, Stig Ericsson, who is not given to making wild claims, speaks confidently of production of this engine beginning "within a few years".

There is nothing new about turbo-compounding. Decades ago some aircraft and marine engine manufacturers such as Napier and Sulzer began to employ the system with varying success and manufacturers of CV diesel engines have been talking about it for many years.

The only major series production turbo-compound engine to enter service was the Wright R-3350 aero engine. This was an 18-cylinder, twobank radial spark-ignition unit, used on the Douglas DC7 and Lockheed Super Constellation of the 1950s.

Until now, however, the development work always petered out a long way short of production road-going engines. In the view of Scania's engineers the time is now ripe to move on.

So what exactly is turbocompounding? What are the incentives for its development, and why has it not been used on production truck engines before now?

Turbo-compounding is one means of making an internal combustion engine more efficient, or more accurately, less inefficient. Any internal combustion engine is a heat engine that extracts thermal energy from its fuel and converts it to mechanical energy. Diesel engines are fundamentally much more efficient at this job than petrol engines, but still convert less than half the energy stored in the fuel into power at the flywheel.

The most thermally efficient of modem, heavy duty truck and bus diesel engines (in other words those with the lowest brake specific fuel consumption) even with turbocharging and charge-cooling, can only manage a maximum thermal efficiency of around 44%. Most of the remaining 56% of available thermal energy is lost as heat to the engine's air or liquid cooling medium and to its exhaust.

Scania reckons that on its 11-litre engine as much as 35% of the fuel's energy content is lost through the exhaust gases. Conventional turbocharging is one way of using some of this energy to force a greater mass of air into the engine's combustion chambers.

A turbo-compound system uses an exhaust-gas-driven turbine of broadly similar design to a conventional turbocharger, but instead of the rotor driving a second rotor to compress inlet air, it is geared to the engine's crankshaft to convert thermal energy to mechanical energy.

The result is an increase in power at the flywheel, coupled with an improvement in thermal efficiency and thus better specific fuel consumption (fuel used per unit of power developed).

It is primarily the exhaust gas's thermal energy rather than its pressure or flow which drives the turbine, although a combination of all three is essential. Scania says exhaust gas temperature drops by 100150°C across the standard turbocharger on its 11-litre engine, but is still at around 500°C when it leaves the turbocharger. The second turbine unit on the turbo-compound Scania engine lowers exhaust gas temperature by a further 100°C.

One of the biggest problems facing any development engineer working on turbocompounding is successfully gearing the speed of the turbine's rotor, typically in excess of 50,000rpm, down to crankshaft speeds of around 1,0002,00Orpm, without incurring heavy mechanical efficiency losses. Where the Wright Turbo Compound used fixed gearing from its three turbines to the crankshaft, the more technically interesting (although commercially disastrous) Napier Nomad diesel aero engine used an infinitely-variable drive.

Most diesel engine manufacturers now agree that suitable gear boxes with step-down ratios of 20 or 30:1 and an effective means of torsional isolation are available. Scania will not say precisely which type of gearbox it uses, but its engineers do confirm that inside the compact housing which is bolted to the offside of the turbo-compounded DSC 11 engine's flywheel housing are two sets of spur gears, and some form of fluid coupling.

With gears of this kind linking a high speed rotor to a relatively low-speed flywheel, gear chatter can be a problem, especially at engine idle speed, but Stig Ericsson does not include this in his short list of factors which will determine when and if Scania puts this engine into full production.

He cites "economics and durability of the turbocompound equipment" as the main development problems still to be solved, but adds that a lot of work remains to be done on exhaust emission testing of the turbo-compound engine. Most manufacturers agree that turbo-compounding is unlikely to have any significant effect on exhaust emissions, but with ever-more stringent legislation being introduced world-wide, even small effects must be taken into account.

Ericsson says that Scania's work to date indicates that the emission of nitrous oxides is likely to fall slightly with the turbo-compound engine, while particulates emission may increase slightly.

Still on the subject of exhaust emissions, Ericsson cites the fact that nitrous oxides in the exhaust gas increase as combustion temperature increases in a diesel engine, as a reason why Scania has not followed the turbo-compound development route taken by many other manufacturers and combined it with some form of combustion chamber insulation.

The basis of the argument for this is that the more that heat loss to the coolant can be reduced — and thus the heat in the combustion chamber increased — the more thermal energy is available in the exhaust for recovery by the turbo-compounding. Ericsson says that, like virtually every other manufacturer, Sc.ania has experimented with ceramic materials to insulate the combustion chamber and exhaust ports. He remains unconvinced that any of these ceramics can yet reach the quality standard demanded.

Without any combustion chamber insulation the potential power and specific fuel consumption gains from turbocompounding are relatively modest — too modest, according to Cummins, for example, to make the exercise worthwhile. Clearly Scalia does not agree. Ericsson says that turbo-compounding has pushed up the gross (ISO) power output of the DSC 11 from 264kW (354hp) to around 300kW (400hp), although it has not yet been rated to any independent standard, while its thermal efficiency has risen from 44% to 46%.

Scania's surprise announcement about its turbo-compound 11-litre engine is likely to encourage other manufacturers to review the work they have already done along these lines, but those we spoke to had reservations about the future of the system.

In Gothenburg, on the other side of Sweden from Scania's Sodertalje headquarters, Volvo's chief engine engineer, Per Sune Berg, disagrees with Scania's view. He sees little chance of it being in production in the near future and firmly believes that "turbocompounding is never worthwhile without some form of insulation".

Dafs chief engine expert, and the man behind its successful ATi revisions, is Ed Sluyter. He says Daf has done "a lot of work on turbo-compounding. I believe in it, but [think the best way is in combination with insulated exhaust ports". Sluyter also thinks that it may be better to avoid the complication of gearing the turbine to the flywheel by using it to drive engine auxiliaries such as the compressor via a microprocessor-based control.

Ken Walker, chief engineer of Perkins' advanced projects, sums up many manufacturers' views on the subject: "The issue is no longer a technological one, but more concerned with economics and market demands."

Cummins has probably done more work on turbocompounding than any other CV engine manufacturer, having started in 1972 on its 14litre engine and conducting road trials on it in 1979. Now, however, most of its development work seems to be aimed at fully adiabatic (no heat loss) engines for military applications with turbo-compounding.

It must be significant, however, that Detroit Diesel Allison claims that it has already built a turbo-compound version of its 60 Series, which was introduced earlier this year.