Men in the 'News 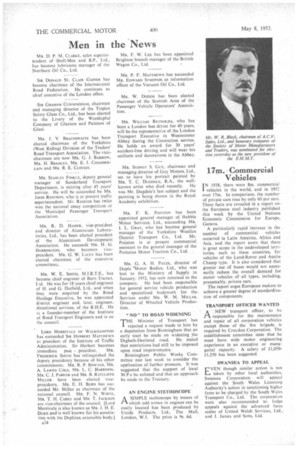 Page 26, 8th May 1953 — Men in the 'News
Close
Noticed an error?
If you've noticed an error in this article please click here to report it so we can fix it.
Keywords : Pia Flight 705, Business / Finance

SIR DONALD ST. CLAIR GAINER has become chairman of the International Road Federation. He continues as chief executive of the London office.

SIR GRAHAM CUNNINGHAM, chairman and managing director of the Triplex Safety Glass Co., Ltd., has been elected to the Livery of the Worshipful Company of Glaziers and Painters of Glass.

MR. STANLEY FINKLE, deputy general manager of Sunderland Transport Department, is retiring after 45 years' service. He will be succeeded by MR. JOHN ROSTRON, who is at present traffic superintendent. Mr. Rostron has twice won the national essay competition of the Municipal Passenger Transport Association.

MR. R. D. HAMER, vice-president and director of Aluminium Laboratories, Ltd., has been elected president of the Aluminium Development Association. He succeeds MR. H. G. HmtarkiaroN, who becomes president. MR. G. W. LACEY has been elected chairman of the executive yommittem MR. W. E. SmrrH, Ivf.I.R.T.E., has become chief engineer of Burn Transit, Ltd. He was for 18 years chief engineer of If. and G. Duffield, Ltd., and when they were acquired by the Road Haulage Executive, he was appointed district engineer and, later, engineer, directional services, of the R.H.E. He is a founder-member of the Institute of Road Transport Engineers and is on the council.

MR. W. Dorms has been elected chairman of the Scottish Area of the Passenger Vehicle Operators' Association.

MR. WILLIAM REYNOLDS, Who has been a London bus driver for 40 years, will be the representative of the London Transport Executive in Westminster Abbey during the Coronation service. He holds an award for 30 years' accident-free driving and will wear his uniform and decorations in the Abbey.

MR. SYDNEY S. GUY, chairman and managing director of Guy Motors, Ltd., sat to have his portrait painted by MR. T. C. DUGDALE, R.A., the wellknown artist who died recently. He was Mr. Dugdale's last subject and the painting is being shown in the Royal Academy exhibition.

MR. G. A. H. PAYZE, director of Duple 'Motor Bodies, Ltd., who was lent to the Ministry of Supply in January, 1952. has now returned to the company. He had been responsible for general service vehicle production and specialized bodywork for the Services under MR. W. M. Ma.t.aa, Director of Wheeled Vehicle Production.

"NO" TO ROAD WIDENING

THE Minister of Transport has rejected a request made to him by a deputation from Birmingham that an early start be made on widening the Digbeth-Deritend road. He stated that restrictions had still to be imposed upon road improvements.

Birmingham Public Works Committee met last week tUt consider the application of further pressure. It was suggested that the support of local M.P.s be enlisted and that an approach be made to the Treasury.