The whole of the proceedings on the Bill were completed 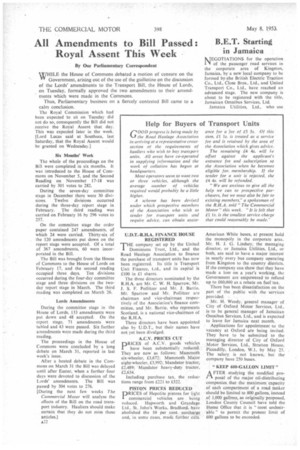 Page 24, 8th May 1953 — The whole of the proceedings on the Bill were completed
Close
Noticed an error?
If you've noticed an error in this article please click here to report it so we can fix it.

in six months. It was introduced to the House of Commons on November 5, and the Second Reading on November 17-18 was carried by 301 votes to 282.

During the seven-day committee stage in December there were 30 divisions. Twelve divisions occurred during the three-day report stage in February. The third reading was carried on February 16 by 296 votes to 251.

On the committee stage the order paper contained 247 amendments, of which 24 were carried. Thirty-six of the 120 amendments put down on the report stage were accepted. Of a total of 367 amendments, 60 were incorporated in the Bill.

The Bill was brought from the House of Commons to the House of Lords on February 17, and the second reading occupied three days. Ten divisions occurred during the four-day committee stage and three divisions on the twoday report stage in March. The third reading was completed on March 26.