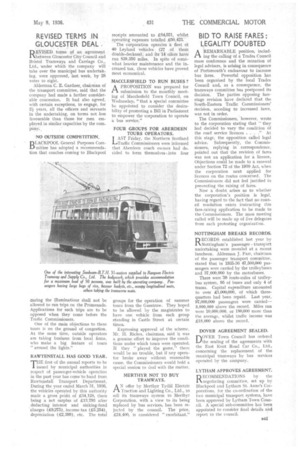 Page 55, 8th May 1936 — REVISED TERMS IN GLOUCESTER DEAL
Close
Noticed an error?
If you've noticed an error in this article please click here to report it so we can fix it.
Keywords : Rawtenstall, Tram, Bus, Business / Finance

REvisED terms of an agreement betivccn Gloucester City Council and Bristol Tramways and Carriage Co., Ltd., 'under which the company Wilt take over the municipal bus undertaking, were approved, last week, by 28 votes to eight.

Alderman C. E. Gardner, chairman of the transport committee, said that the company had made a further considerable concession. It had also agreed, with certain exceptions, to engage, for 2i years, all the officers and servants in the undertaking, on terms not less favourable than those for men empIOyed in similar capacities by the corn

during the illuminations shall not be allowed to run trips on the Promenade. Applications for such trips are to be opposed when they come before the Traffic Commissioners.

One of the main objections to these tours is on the ground of congestion. At the same time, outside operators are taking business from local firms, who make a big feature of tours " around the lights."

THE first of the annual reports to be issued by municipal authorities in respect of passenger-vehicle operation in the past year has came to hand from Rawtenstall Transport Department. During the year ended March 31, 1936, the vehicles operated by this authority made a gross prOfit of £34,128, there being a net surplus of £13,793 after deducting interest and sinking-fund charges (£9,275), income tax (£5,254), depreciation (£2,399), etc. The total

• The corporation operates a fleet of 40 Leyland vehicles. (27 of them double-deckers); and ItS 14" oilers'ha.Ve run 839,356 Miles, In spite of somewhat heavier maintenance and the increased tax, these vehicles have proved most economical.

MACCLESFIELD TO RUN BUSES? A PROPOSITION was prepared for submission to the monthly meeting of Macclesfield Town Council, on Wednesday, "that a special committee be appointed to consider the desirability of promoting a Bill in Parliament to empower the "corporation to Operate a bus service."

LAST Friday, the Northern Scotland Traffic Commissioners were informed that Aberdeen coach owners had decided to form themselves ,into four

groups for the operation of summer tours from the Guestrow. They hoped to be allowed by the magistrates to have one vehicle from each group standing in Castle Street at certain times.

Expressing approval of the scheme, Mr. IL Riches, chairman, said it was a genuine effort to improve the conditions under which tours were operated. If they " played the game," there would be no trouble, but if any operator broke away without reasonable cause, the Commissioners would hold a special session to deal with the matter.

MERTHYR NOT TO BUY TRAMWAYS.

AN offer by Merthyr Tydfil Electric Traction and Lighting Co., Ltd., to sell its tramways system to Merthyr Corporation, with a view to its being replaced by bus services, has been rejected by the council. The price, £24,400, is considered " exorbitant."