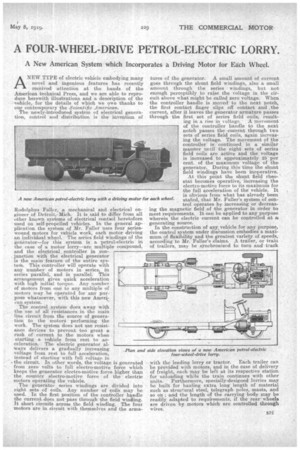 A New American System which Incorporates a Driving Motor for Each Wheel.

4. .L TYPE of electric vehicle embodying many novel and ingenious features has recently

received attention at the hands of the Atherican technical Press, and we are able to reproduce herewith illustrations and a description of the vehicle, for the details of which we owe thanks to our contemporary the •k5' cientific American.

The newly-introduced system of electrical generation, control and distribution is the invention of

Roclolphus Fuller, a mechanical and electrical engineer of Detroit,-Mieh. It is said to differ from all other known systems of electrical contxol heretofore used on self-propelled vehicles. In the general application the system of Mr. Fuller uses four serieswound motors for vehicle work, each motor driving an individual wheel. The series field windings of the generator—for this system is a petrol-electric in the case of a motor lorry—are multiple compound, and the electrical controller in con junction with the electrical generator is the main feature of the entire systern. This controller will operate with any number of motors in series, in series parallel, and in parallel. This arrangement gives quick acceleration with high initial torque. Any number of motors from one to any multiple of motors may be operated for any purpose whatsoever, with this new Amerk. can system.

The control system does away with the use of all resistances in the main line circuit from the source of generation to the motors performing the work. The system rides not use resistance devices to prevent tod great a rush of current to the motors when starting a vehicle from rest to acceleration. The electric generator always delivers a gradually increasing voltage from rest to full acceleration, instead of starting with full voltage in the circuit. In other words, the voltage is generated from zero volts -to full electro-motive force which keeps the generator electro-motive force higher than the counter electro-inotive force of the electric motors operating the vehicle. The generator series windings are divided into eight sets of coils. Any number of coils may be used. In the first position of the controller handle the current does not pass through the field 'winding. It short circuits across the field winding. The four

motors are in circuit with themselves and the arrna

. -Plan and Lures of the generator. A small amount of current goes through the shunt field windings, also a small amount through the series windings, but not enough perceptibly to raise the voltage in the circuit above, what might be called zero voltage. When the controller handle is moved to the next notch, the first contact finger slips off contact and ,the current, after it leaves the generator armature passes through the first set of series field coils, resulting in a rise in volt age. A movement of the controller bundle to the next notch passes the current through two sets of series field coils, again increasing the voltage. The movement Of the controller is continued in a similar manner until the eight sets of series field coils are active and the voltage is increased to approximately 25 per cent. of the maximum voltage of the generator. During this time the shunt field windings have been. inoperative.

At this point the shunt field rheostat becomes operative, increasing the electro-motive force to its maximum for the full acceleration of the vehicle. It is obvious from what has already been stated, that Mr. Fuller's system of control operates by increasing or decreasing the magnetic field of the generator in Order to meet requirements. It can be applied to any purpose wherein the electric current can be controlled at 2.0 generating source.

In the construction of any,vehicle for any purpose, the control system under discussion embodies a maximum of flexibility and the greatest variety of speeds, according to Mr. Fuller's claims. A trailer, or train of trailers, may be synchronized to turn and track with the leading lorry or tractor. Each trailer can be provided with motors. and in the ease of delivery of freight, each may be left at its respective station for unloading while the train continues with other units. Furthermore, specially-designed lorries may be built for hauling extra long length of material such as structural steel, telegraph poles, masts, and

so ; and the length of the carrying body may be readily adapted to requirements, if the rear wheels are driven by motors which are controlled through wires.