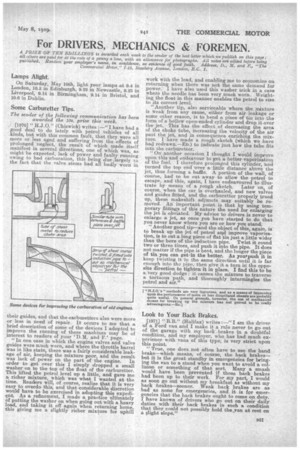 Page 21, 8th May 1919 — For DRIVERS, MECHANICS & FOREMEN.
Close
Noticed an error?
If you've noticed an error in this article please click here to report it so we can fix it.

A PRIZE OF TEN ShILLINGS is awarded each week to the sender of the best letter which we publish on this page ; all others are paid for at the rate of a penny a lane, with an allowance for photographs, All notes are edited before being published. Mention your employer's name, in confidence, as evidence of gOod faith. Address, D., 31: and F„, "The Commercial Motor," 7-16, Rosebery Avenue, London, EX, 1,

The serider of the following communication has been awarded the 10s, prize this week.

[1970] " H.J.0." (Chiswick) writes :—" I have had a good deal to do lately with petrol vehicles of all kinds, but with this common fault, that they were all more or less aged and suffering from the effects of prolonged neglect, the result of which made itself manifest in several directions, one of which was, as might be expected, lack of power and faulty running owing to bad carburation, this being due ,largely to the fact that the valve stems had all badly worn in their guides, and that the carburetters also were more or less in need of repair. It occurs to me that a brief description of some of the devices I adopted to improve the running of these machines may be of interest to readers of your D.M. and F.' page. "In one case in which the engine valves and valve guides were much worn, and where the throttle barrel was in like state there was a fairly considerable leakage of air, keeping the mixture poor, and the result was lack of power on the part of the engine. In order to get over this I simply 'dropped a small washer on to the top of the float of the carburetter, This lifted the petrol level up a little, and gave me a richer mixture, which was what I wanted at the time. Readers will, of course, realize that it is very easy to overdo this, and that considerable discretion would have to be exercised in adopting this expedient As a refinement, I made a practice ultimately of putting the washer on when going out with s, heavy load, and taking it off again when returning home, this giving me a slightly richer mixture for uphill

work with the load, and enabling Me to economize on returning when there was not the same demand for power. 1 have also used this washer trick in a case where the needle has been very much worn. -Weighting the float in this manner enables the petrol to rise to its correct level.

"Another tip, also serviceable where the mixture is weak from any cause, either from air leakage or some other reason, is to bend a piece of tin into the form of a hollow open-ended cylinder and drop it over the jet. This has the effect of decreasing the area of the choke tube, increasing the velocity of the air past the jet, and in consequence enriching the mixture. I have made a rough sketch (which we have had redrawn.—En.) to indicate just how the tube fits into the carburetter.

"On another occasion I thought I would improve upon this and endeavour to get a better vaporizatioa of the fuel. I therefore prolonged this cylinder, and turned the top end over & little distance above the jet, thus forming a baffle. A portion of the wall, of course, had to be out away to allow the petrol to escape, and this, again, I have endeavoured to illustrate by, means of a rough sketch. Later on of course, when the car is overhauled, and new valves and guides fitted, and the carburetter properly trued up, these makeshift adjuncts may suitably: be removed. An important point is that by using temporary fittings of this nature the need for enlarging the jet is obviated. My advice to drivers is never to enlarge a jet, as once you have started to do that you never know where you are or how you stand. "Another good tip—and the object of this, again, is to break up the jet of petrol awl improve vaporization, is to cut a long piece of flat tin just a little wider than the bore of the induction pipe. Twist it round two or three times, and push it into the pipe. It does not matter if the pipe is bent, and the longer the piece of tin you can get.in the better. As youtpush it in keep twisting it in the same direction until it is far enough into the pipe, then give it a turn in the opposite direction to tighten it in place. I find this to be a very good dodge : it causes the mixture to traverse a tortuous path, and thoroughly intermingles the petrol and air."

[ " methods are very ingenious, and as a means of improving upon the performance of more or less dilapidated chassis are probably quite usefaL On general grounds, however, the use of mechanical means for breaking up the mixture has not proved to be really advantageous.—En,)

Look to Your Back Brakes.

[1971] "B.13." (Halifax) writes :—" I am the driver of a Ford van and I make it a rule never to go out of the garage with my back brakes in a doubtful condition, and my employer, who has had much experience with vans of this type, is very strict upon this point.

"True, one does, not often have to use the hand brake—which means' of course, the back brakes— hut it is the great standby in emergencies for bringing the van to a stand when you want to avoid a collision or something of that sort. Many a smash would have been prevented if those back brakes had been up to their work. For my part? I would as soon go out without my breakfast as without my back brakes—sooner. Weak back brakes are as bad as none for emergencies, and it is for emergencies that the back brakes ought to come on duty. I have known of drivers who go out on their daily duties with their back brakes in such a condition that they could not possibly hold the _van at rest on a slight slope."