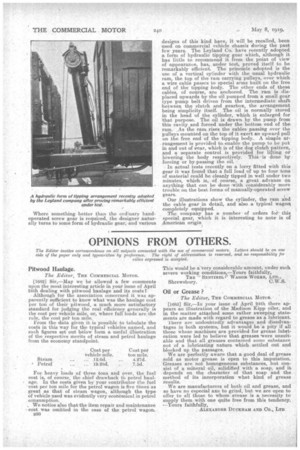 Page 20, 8th May 1919 — OPINIONS FROM OTHERS.
Close
Noticed an error?
If you've noticed an error in this article please click here to report it so we can fix it.

Editor invites correspondence on all subjects connected with the use of commercial motors. Letters should be on one of the paper only and typewritten by preference. The riyht of abbreviation. isreserved, and no responsibility fot vi-i`ws expressed is accepted.

[1682] Sir,—May we be allowed a few comments upon the most interesting article in your issue of April 24th dealing with pitwood haulage and its costs? Although for the association concerned it was apparently sufficient to know what was the haulage cost per ton of their pitwood, a much more satisfactory standard for judging the real efficiency generally is the cost per vehicle mile, or, where full loads are the rule, the cost per ton mile. From the data given it is possible to tabulate the costs in this way for the typical vehicles named, and such figures set out below form a useful illustration of the respective merits of steam and petrol haulage from the economy standpoint.

... 19.284. 7.5d. Steam • Petrol For heavy loads of three tons and over, the fuel cost is, of course, the chief drawback tb petrol haulage. In the costs given by your contributor the fuel cost per ton mile for the petrol wagon is five times as great as that of steam wagon, although the type of vehicle used was evidently very economical in petrol consumption.

, We notice also that the item repair and maintenance cost was omitted in the case of the petrol wagon. n50 This would be a very considerable amount, under such severe working conditions,---Yours faithfully, THE SENTINEL WAGON WORKS, LTD., Shrewsbury. C.W.S.

The Editor, THE COMMERCIAL MOTOR..'

[1683] Sir,—In your issue of April 24th there appears an illustration of the Madison Kipp oiler, and in the matter attached some rather sweeping statements are made with regard to grease as a lubricant.

There are undoubtedly advantages and disadvantages in both systems, but it would be a pity if all those whose machines are provided for grease lubrication were led to believe that greases were unsuitable and that all .greases contained some substance not of a lubricating nature which settled out and blocked up the passages. We are perfectly aware that a good deal. of grease sold as motor grease is open to this imputation. Greases are not homogeneous substances, but consist of a mineral oil, solidified with a soap, and it depends on the character of that soap and the method of its incorporation what kind of grease results.

We are manufacturers of both oil and grease, and so have no especial axe to grind, but we are open to offer to all those to whom grease is a necessity to supply them with one quite free from this tendency. —Yours faithfully, • ALEXANDER DUCKHAM AND CO., LTD