THE PROBLEM OF TRANSPORT IN PALESTINE. 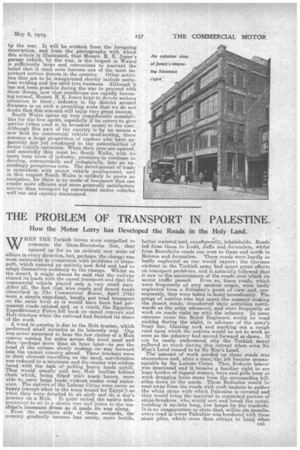 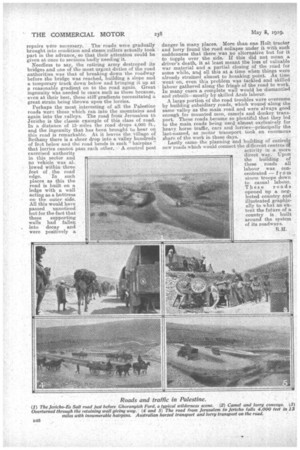 Page 17, 8th May 1919 — THE PROBLEM OF TRANSPORT IN PALESTINE.
Close
Noticed an error?
If you've noticed an error in this article please click here to report it so we can fix it.

How the Motor Lorry has Developed theRoads in the Holy Land.

WHEN THE Turkish forces were compelled to evacuate the Gaza-Beersheba line, they

opened up for us an entirely new state af affairs in every direction, but, perhaps, the change was most noticeable in connection with problems of transport, which entered an entirely new field and had to adapt themselves suddenly to the change. Whilst on the desert, it might almost he said that the railway shared its loads with the camel transport and that the commercial vehicle played only a very small part. After all, the fact that wire roads and desert roads (described in The Commercial Motor, April 17th) were a simple expedient, hardly put road transport on the same level as it would have been had permanent roads existed and, as a result, the Egyptian Expeditionary Force fell back on camel convoys and Holt tractors when the railroad had finished its share of the work.

A word in passing is due to the Holt tractor, which performed small miraeles in its leisurely way. One was never surprised to hear the low clatter of a Holt convoy coming for miles across the level sand and then--perhaps more than ken hour later—to see the head of the column slowly making its way forward into the vacant country. ahead. These tractors were in their element travelling on the sand, astvibration was reduced to a minimum and the engine was seldom faced with the task of pulling heavy loads uphill. They would usually pull two Holt trollies behind them which, being fitted wit)hy track. layers, were able to carry large loads without undue road resistance. The natives of the Labour Corps were never so happy (except when in the train bound for Egypt!) as when they were detailed -Co sit aloft and do a day's journey on a Holt. It quite suited the native temperament to sit in a sleepy way and listen to the machine's, incessant drone as it made its way along.

From the northern side of Gaza onveards, the country gradually became less sandy, more fertile,

better watered `and, consequently, inhabitable. Roads led from Gaza to Ludd, Jaffa and Jerusalem, whilet from Beersheba, roads ran. west to Gaza and. north to Hebron and Jerusalem. These roads were hardly as badly neglected as one would expect ; the German element in. the Turkish army had spent great efforts on transport problems, and it naturally followed that it raw to the maintenance of the roads over which its

motor traffic passed. Even so, these roads, which were frequently of very ancient origin, were badly neglected from a Britisher'e point of view and, consequently, they were taken in hand immediately. The gangs of natives who had spent the summer making the desert roads, transferred their activities northwards as the army advanced, and were frequently at work on roads right up with the infantry. In some extreme cases the Royal Engineers would be road making during the night, in advance of the army's front line, blasting rock and marking out a rough road upon which the natives would be set to work as soon as the infantry had moved forward at dawn. It' can be easily understood why the Turkish moral suffered so much durieg this retreat when even No Man's Land ceased to be No Man's Land.

The -amount of work needed on these roads was stupendous and, after a time,`the job became unmanageable by the Labour Corps. Then Bedouin labour _was impressed and it became a familiar sight to see huge hordes of ragged .women, boys and girls busy at work dragging loose stone from the surrounding hill sides down to the roads. These Bedouins would be sent away from the roads with rush baskets to gather the white stone with which Palestine is-covered and they would bring the material to organised parties of

stone-breakers who would sort and break the metal, building updnto long, low heaps by the roadside. It is no exaggeration to state that, within six months, every road in lower Palestine was borelered with these stone piles, which' were then always to hand when repairs were necessary. The roads were gradually brought into condition and steam rollers actually took part in the advance, so that their attention could be given at once to sections badly needing it.

Needless to say, the retiring army destroyed its bridges and one of the most argent ditties of the road authorities was that of breaking down the roadway before the bridge was reached, building a slope and a temporary track down below and bringing it up at a reasonable gradient on to the road again. Great ingenuity. was needed in cases such as these because, even at their best, these stiff gradients necessitated a great strain being thrown upon the lorries.

Perhaps the most interesting of all the Palestine roads were those which ran into the mountains and again into the valleys. The road from Jerusalem to Jericho is the classic example of this class of road. In a distance of 13• miles the road drops 4,000 ft., and the ingenuity that has been brought to bear on this road is remarkable. AS it leaves the . village of Bethany there is a sheer drop into a valley hundreds

. of feet below and the road bends in such " hairpins '' that lorries cannot pass each other. • A control post exercised authority in this sector and no vehicle was allowed within three feet of the road edge. In such places as this the road is built on a ledge with a wall acting an a buttress on the outer side. All this would have passed unnoticed but for the fact that these supporting walls had fallen into decay and were positively a

danger In many places. More than one Holt tractor and lorry found the road collapse under it with such suddenness that there was no alternative but for it to topple over the side. If this did not mean a driver's death, it at least meant the loss of valuable war material and a partial closing of the road for some while, and all this at a time when things were already strained almost to breaking point. As time went on, even this problem was tackled and skilled labour gathered along the fringe of the road to work. In many cases a complete wall would be dismantled and rebuilt—mostly by skilled Arab labour.

A large portion of the road troubles were overcome by building subsidiary roads, which wound .along the same valley as the main road and were always good enough for mounted men, camels and donkey transport. These roads became so plentiful that they led to the main, roads being used almest exclusively for heavy, horse traffic, cars and lorries—principally the last-named, as motor transport took an enormous share of the work in those days. Lastly camethe planning and building of entirelg

new roads which would connect the different centres elf activity in a more direct way. 'Upon

the building of these roads all labour was concentrated -f re m storm troops down to casual labour. These roads opened up a neglected country and illustrated graphically to what an extent the future of a country is built around the system of its roadways.