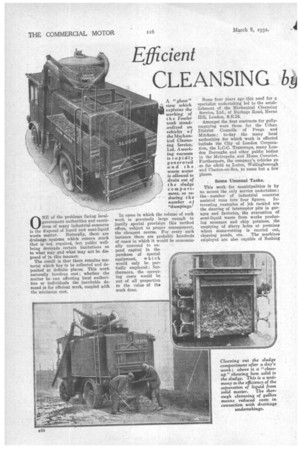 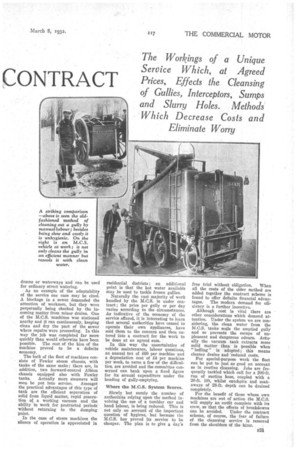 Page 88, 8th March 1932 — Efficient
Close
Noticed an error?
If you've noticed an error in this article please click here to report it so we can fix it.

The Workings of a Unique Service Which, at Agreed Prices, Effects the Cleansing of Gullies, Interceptors, Sumps and Slurry Holes. Methods Which Decrease Costs and Eliminate Worry

waste matter. Naturally, there are drainage systems which remove much that is no,t required, but public wellbeing demands certain limitations as to what may and what may not be disposed of in this manner.

The result is that there remains material which has to be collected and deposited at definite places. This work naturally involves cost ; whether the matter be one affecting local authorities or individuals the inevitable demand is for efficient work, coupled with the minimum cost.

In cases in which the volume of such work is genuinely large enough to justify special provision this method offers, subject to proper management, the cheapest course. For every such instance there are probably hundreds of cases in which it would be economically unsound to ex

pend capital in the purchase of special equipment, which would only be partially employed ; furthermore. the operating costs would be out of all proportion to the value of the work done. Some four years ago this need for a specialist undertaking led to the establishment of the Mechanical Cleansing Service, Ltd., of Burbage Road, Herne Hill, London, S.E.24.

Amongst the first contracts for gullyemptying were those for the Urban District Councils of Penge and Mitcham ; to-day the many local authorities for which work is effected include the City of London Corporation, the L.C.C. Tramways, many London Boroughs and other public bodies in the Metropolis and Home Counties. Furthermore, the company's Vehicles go so far afield as Luton, Wellingborough and Clacton-on-Sea, to name but a few places.

This work for municipalities is by no means the only service undertaken; the-number of industrial concerns

assisted runs into four figures. Interesting _examples of job tackled are the clearing of interceptor pits in garages and factories, the evacuation of semi-liquid waste from works producing sausages and chip potatoes, the emptying of slurry holes at premises where stone-cutting is carried out,

cleaning ponds, etc. The machines eniployed are also capable of flushing drams or waterways and can be used for ordinary street watering.

As an example of the adaptability of the service one case may be cited. A blockage in a sewer demanded the attention of workmen, but they were perpetually being checked by the incoming matter from minor drains. One of the M.C.S. machines was stationed nearby and it ran continuously, keeping clean and dry the part of the sewer where repairs were proceeding. In this way the job was completed far more quickly than would otherwise have been possible. The cost of the hire of the machine proved to be a definite economy.

The bulk of the fleet of machines contists of Fowler steam chassis, with tanks of the same make; there are, in addition, two forward-control Albion chassis equipped also with Fowler tanks. Actually more steamers will soon be put into service. Amongst the practical advantages of this type of tank are the efficient separation of solid from liquid matter, rapid generation of a working vacuum and the ability to work for protracted periods without returning to the dumping point.

residential districts ; an additional point is that the hot water available may be used to tackle frozen gullies.

Naturally the vast majority of work handled by the M.C.S. is under contract ; the price per gully or per day varies according to the circumstances. As indicative of the economy of the service offered, it is interesting to learn that several authorities have ceased to operate their own appliances, have sold them to the concern and then entered into a contract for the work to be done at an agreed sum.

In this way the uncertainties of vehicle maintenance, labour questions, an annual tax of £60 per machine and a depreciation cost of £4 per machine per week, to name a few of the difficulties, are avoided and the committee concerned can bank upon a fixed figure for its annual expenditure under the heading of gully-emptying.

Where the M.C.S. System Scores.

Slowly but surely the number of authorities relying upon the method involving the use of a tumbler car and hand labour, is being reduced. This is not only on account of the important question of hygiene, but because the M.C.S. has proved its service to be cheaper. The plan is to give a day's free trial without obligation. When

all the costs of the older method are added together the contract scheme is found to offer definite financial advantages. The modern demand for efficiency is a further incentive.

Although cost is vital there are other considerations which demand attention. Under the system we are considering, the clean water from the I.C.S. tanks seals the emptied gully and so prevents the escape of unpleasant and dangerous odours. Actually the vacuum tank extracts more solid matter than is possible when " ladling " is adopted ; this means cleaner drains and reduced costs.

For special-purpose work the fleet can be put to just as good an account as in routine cleansing. Jobs are frequently tackled which call for a 200-ft. run of suction hose, coupled with a 20-ft. lift, whilst catchpits and soakaways of 28-ft. depth can be drained completely.

For the benefit of those whose own machines are out of action the M.C.S. will supply an outfit complete with its crew, so that the effects of breakdowns

can be avoided. Under the contract scheme, of course, the fear of failure of the cleansing service is removed from the shoulders of the hirer.