Luck of the Irish 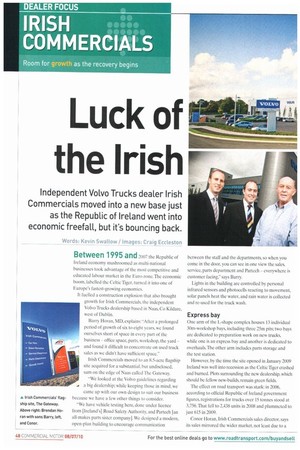 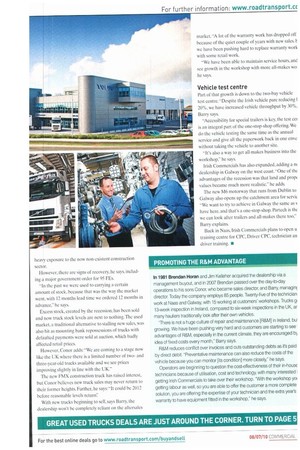 Page 48, 8th July 2010 — Luck of the Irish
Close
Noticed an error?
If you've noticed an error in this article please click here to report it so we can fix it.
Keywords : Transport, Truck, Vehicles, Volvo Trucks, Horan

Independent Volvo Trucks dealer Irish Commercials moved into a new base just as the Republic of Ireland went into economic freefall, but it's bouncing back.

Words: Kevin Swallow / Images: Craig Eccleston Between 1995 and 2007 the Republic of Ireland economy mushroomed as multi-national businesses took advantage of the most competitive and educated labour market in the Euro-zone.The economic boom, labelled the Celtic Tiger, turned it into one of Europe's fastest-growing economies.

It fuelled a construction explosion that also brought growth for Irish Commercials, the independent Volvo Trucks dealership based in Naas, Co Kildare, west of Dublin.

Barry Horan. MD, explains: "After a prolonged period of growth of six to eight years, we found ourselves short of space in every part of the business office space, parts. workshop, the yard and found it difficult to concentrate on used truck sales as we didn't have sufficient space."

Irish Commercials moved to an 8.5-acre flagship site acquired for a substantial. but undisclosed, sum on the edge of Naas called The Gateway.

"We looked at the Volvo guidelines regarding a big dealership: while keeping those in mind, we came up with our own design to suit our business because we have a few other things to consider.

"We have vehicle testing here, done under licence from [Ireland's] Road Safety Authority. and Partech [an all-makes parts sister company]. We designed a modern, open-plan building to encourage communication between the staff and the departments, so when you come in the door, you can see in one view the sales, service, parts department and Partech everywhere is customer facing," says Barry.

Lights in the building are controlled by personal infrared sensors and photocells reacting to movement, solar panels heat the water, and rain water is collected and re-used for the truck wash.

One arm ot the L-shape complex houses 13 individual 30m-workshop bays, including three 25m pits; two bays are dedicated to preparation work on new trucks, while one is an express bay and another is dedicated to overhauls. The other arm includes parts storage and the test station.

However, by the time the site opened in January 2009 Ireland was well into recession as the Celtic Tiger crashed and burned. Plots surrounding the new dealership. which should be fellow new-builds, remain green fields.

Conor Horan, Irish Commercials sales director, says its sales mirrored the wider market, not least due to a

However, there are signs of recovery, he says, including a major government order for 95 FEs.

"In the past we were used to carrying a certain amount of stock, because that was the way the market went, with 12 months lead time we ordered 12 months in advance," he says.

Excess stock, created by the recession, has been sold and now truck stock levels are next to nothing. The used market, a traditional alternative to stalling new sales, was also hit as mounting bank repossessions of trucks with defaulted payments were sold at auction, which badly affected retail prices.

However, Conor adds: "We are coming to a stage now like the UK where there is a limited number of twoand three-year-old trucks available and we see prices improving slightly in line with the UK."

The new FMX construction truck has raised interest, but Conor believes new truck sales may never return to their former heights. Further, he says: "It could he 2012 before reasonable levels return': With new trucks beginning to sell, says Barry, the dealership won't be completely reliant on the aftersales market. -A lot of the warranty work has dropped off because of the quiet couple of years with new sales. h we have been pushing hard to replace warranty work with some retail work, "We have been able to maintain service hours, and see growth in the workshop with more all-makes wo: he says.

Part of that growth is down to the two-hay vehicle test centre. "Despite the Irish vehicle pare reducing 1 20%, we have increased vehicle throughput by 30%. Barry says.

"Accessibility for special trailers is key. the test cei is an integral part of the one-stop-shop offering. We do the vehicle testing the same time as the annual service and give all the paperwork back in one enve without taking the vehicle to another site.

"It's also a way to get all-makes business into the workshop,he says, Irish Commercials has also expanded. adding a n( dealership in Galway on the west coast. "One of the advantages of the recession was that land and prop( values became much more realistic.he adds.

The new M6 motorway that runs from Dublin to Galway also opens up the catchment area for servic -We want to try to achieve in Galway the same as v have here. and that's a one-stop-shop. Partech is the we can look after trailers and all-makes there too," Barry explains.

Back in Naas, Irish Commercials plans to open u training centre for CPC, Driver CPC, technician an driver training. II