Come into the Open 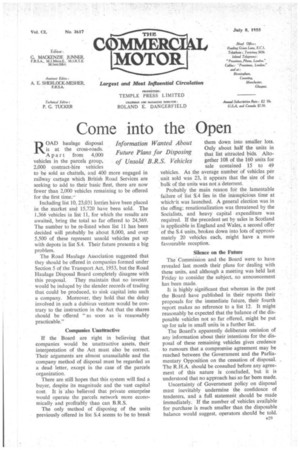 Page 39, 8th July 1955 — Come into the Open
Close
Noticed an error?
If you've noticed an error in this article please click here to report it so we can fix it.

ROAD haulage disposal is at the cross-roads. Apart from 4,000 vehicles in the parcels group. 2,000 contract-hire vehicles to be sold as chattels. and 400 more engaged in railway cartage which British Road Services are seeking to add to their basic fleet, there are now fewer than 2,000 vehicles remaining to be offered for the first time.'

The Road Haulage Association suggested that they should be offered in companies formed under Section 5 of the Transport Act, 1953, but the Road Haulage Disposal Board completely disagree with this proposal. They maintain that no investor would be induced by the slender records of trading that could be produced, to sink capital into such a company. Moreover, they hold that the delay involved in such a dubious venture would be contrary to the instruction in the Act that the shares should be offered "as soon as is reasonably practicable."

Companies Unattractive If the Board are right in believing that companies would be unattractive assets, their interpretation of the Act must also be correct. Their arguments are almost unassailable and the company method of disposal must be regarded as a dead letter, except in the case of the parcels organization.

There are still hopes that this system will find a buyer, despite its magnitude and the vast capita! cost. It is also believed that private enterprise would operate the parcels network more economically and profitably than can B.R.S.

The only method of disposing of the units previously offered in list S.4 seems to be to break them down into smaller lots. Only about half the units in that list attracted bids. Altogether 108 of the 160 units for sale contained 15 to 49 vehicles. As the average number of vehicles per unit sold was 23, it appears that the size of the bulk of the units was not a deterrent.

Probably the main reason for the lamentable failure of list S.4 lies in the inauspicious time at whichlt was launched. A general election was in the offing; renationalization was threatened by the Socialists, and heavy capital expenditure was required. If the precedent set by sales in Scotland is applicable in England and Wales, a second offer of the S.4 units, broken down into lots of approximately 20 vehicles each, might have a more favourable reception.

Silence on the Future The Commission and the Board were to have revealed last month their plans for dealing with these units, and although a meeting was held last Friday to consider the subject, no announcement has been made.

It is highly significant that whereas in the past the Board have published in their reports their proposals for the immediate future, their fourth report makes no reference to a list 12. It might reasonably be expected that the balance of the disposable vehicles not so far offered, might be put up for sale in small units in a further list.

The Board's apparently deliberate omission of any information about their intentions for the disposal of these remaining vehicles gives credence to rumours that a compromise agreement may be reached between the Government and the Parliamentary Opposition on the cessation of disposal. The R.H.A. should be consulted before any agreement of this nature is concluded, but it is understood that no approach has so far been made.

Uncertainty of Government policy on disposal mast inevitably undermine the confidence of tenderers, and a full statement should be made immediately. If the number of vehicles available for purchase is much smaller than the disposable balance would suggest, operators should be told.