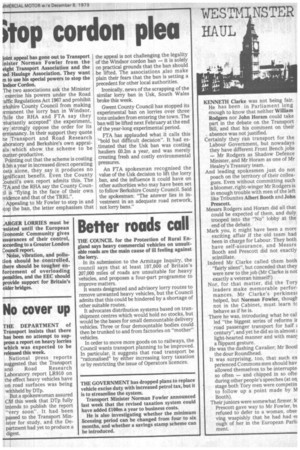 KENNETH Clarke was not being fair. He has been in Parliament long enough to know that neither William Rodgers nor John Horam could take part in the debate on the Transport Bill, and that his comment on their absence was not justified.

Certainly they ran transport for the Labour Government, but nowadays they have different Front Bench jobs — Mr Rodgers as Shadow Defence Minister, and Mr Horam as one of Mr Healey's Treasury team.

And leading spokesmen just do not poach on the territory of their colleagues. Even without committing such a bloomer, right-winger Mr Rodgers is in enough trouble with men of the left like Tribunites Albert Booth and John Prescott.

Messrs Rodgers and Horam did all that could be expected of them, and duly trooped into the "No" lobby at the end of the debate.

Mark you, it might have been a more exciting affair if the old team had been in charge for Labour. They both have self-assurance, and Messrs Booth and Prescott did not exactly scintillate.

Indeed Mr Clarke called them both "fairly silent", but conceded that they were new to the job (Mr Clarke is not exactly a veteran himself!) Nor, for that matter, did the Tory leaders make memorable perfor. mances. Mr Clarke's perkiness helped, but Norman Fowler, though not in the Cabinet, must learn tc behave as if he is.

There he was, introducing what he cal led "the biggest series of reforms ir road passenger transport for half century", and yet he did so in almost light-hearted manner and with rnan a flippant gesture.

He was the dashing Cavalier; Mr Bootl the dour Roundhead.

It was surprising, too, that such ex perienced Commons men should hay allowed themselves to be interrupte.

so often — and chipped in so ofte. during other people's speeches (at on stage both Tory men were competin to follow up a point made by M Booth).

Their juniors were somewhat firmer. 1V. Prescott gave way to Mr Fowler, bt refused to defer to a woman, obse ving waspishly that he had had et ough of her in the European Parli ment.