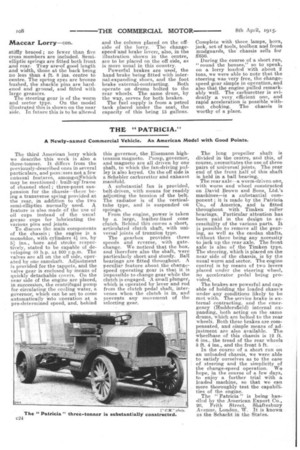 Page 8, 8th April 1915 — THE "PATRICIA."
Close
Noticed an error?
If you've noticed an error in this article please click here to report it so we can fix it.

A Newly-named Commercial Vehicle. An American Model with Good Points.

The third American lorry which we describe this week is also a three-tonner. It differs from the previously-described ones in several particulars, and posssses not a few annsual features, amongs1Which may be mentioned : built-up frame of channel steel ; three-point suspension for the chassis—there being a transverse spring provided at the rear, in addition to the two semi-ellipties normally used. A feature is also made of the use of oil cups instead of the usual grease cups for lubricating the various pins and joints.

To discuss the main components of the chassis ; the engine is a monobloc, with cylinders 41 ins. by 5.1 ins., bore and stroke respectively, stated to be capable of developing 40 h.p. at 900 r.p.m. The valves are all on the off side, operated by one camshaft. Adjustment is provided for the tappets, and the valve gear is enclosed by means of quickly detachable covers. On the near side of the engine are placed, in .succession, the centrifugal pump for:circulating the cooling water, a governor, which can be set to come automatically kith operation at a pre-determined speed, and, behind this governor, the Eisemann hightension magneto. Pump, governor, and magneto are all driven by one shaft, to which the fan-driving pulley is also keyed. On the off side is a Schebler carburetter and exhaust man if old.

A substantial fan is provided, belt-driven, with means for readily adjusting the tension of the belt. The radiator is of the verticaltube type, and is suspended on Springs.

From the engine, power is taken by a large, leather-lined cone clutch. Behind this conses a short, articulated clutch shaft, with universal joints of trunnion type.

The gearbox provides three speeds and reverse, with gate change. We noticed that the box, and therefore also the shaft, were particularly short and sturdy. Ball bearings are fitted throughout. A peculiar feature about the changespeed operating gear is that it is impossible to change gear while the clutch is engaged. A small plunger, which is operated by lever and rod from the clutch pedal shaft, intervenes when the clutch is in, and prevents any movement of the selecting gear. The long propeller shaft is divided in the centre and this, of course, necessitates the use of three pairs of universal joints. The rear end of the front half of this shaft is held in a ball bearing. The rear axle—a worm-driven one, with worm and wheel constructed on David Brown and Sons, Ltd.'s machines—is a substantial com ponent; it is made by the Patricia Co., of America, and is fitted throughout with Timken roller bearings. Particular attention has been paid in the design to ac cessibility of the various parts. It is possible to remove all the gearing, as well as the cardan shafts, without there being any necessity to jack up the rear axle. The front axle is also of the Timken type. The steering, which is placed on the near side of the chassis, is by the usual worm and sector. The engine control is by means of two levers placed under the steering wheel, no accelerator pedal being provided.

The brakes are powerful and capable of holding the loaded chass:s under any conditions likely to be met with. The service brake is external contracting, and the emer gency (Huddersfield) internal ex panding, both acting on the same drums, which are bolted to the rear wheels. Both these brakes are com pensated, and simple means of adjustment are also available. The wheelbase of this chassis is 12 ft. 6 ins., the tread of the rear wheels 5 ft. 4 ins., and the front 5 ft.

In the course of a short run on an unloaded chassis, we were able to satisfy ourselves as to the ease

of steering and the simplicity of the change-speed operation. We

hope, in the course of a few days, to enjoy a further trial with a loaded machine, so that we can more thoroughly test the capabilities of the engine.

The " Patricia " is being handled by the American Export Co., 20, Frith Street. Shaftesbury Avenue, London, W. It is known as the Schacht in the States.