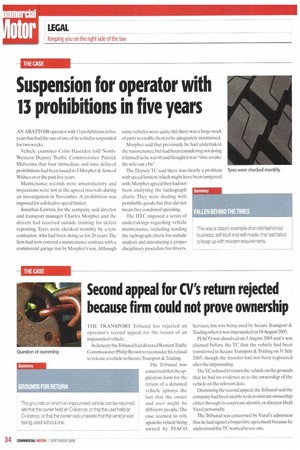 Page 34, 7th September 2006 — Second appeal for CV's return rejeded because firm could not prove ownership
Close
Noticed an error?
If you've noticed an error in this article please click here to report it so we can fix it.
Keywords : Tribunal, Law / Crime

THE TRANSPORT Tribunal has rejected an operator's second appeal for the return of an impounded vehicle.

In January the Tribunal had directedWesternTraffic Commissioner Philip Brown to reconsider his refusal to release a vehicle to Secure Transport &Trading.

The Tribunal was concerned that the application form for the return of a detained vehicle ignores the fact that the owner and user might be different people. The case seemed to rely upon the vehicle being owned by PIACO Services, but was being used by Secure Transport & Trading when it was impounded on 18 August 2005.

PIACO was dissolved on 5 August 2005 and it was claimed before the TC that the vehicle had been transferred to Secure Transport & Trading on 31 July 2005, though the transfer had not been registered after the impounding.

Dismissing the second appeal. the Tribunal said the company had been unable to demonstrate ownership either through its corporate identity or director Hall Vura I personally.

The Tribunal was concerned by Vural's admission that he had signed a bogus hire agreement because he understood the TC wanted to see one.