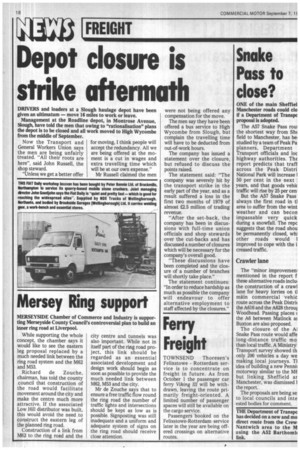 Page 20, 7th September 1979 — Snake Pass to close?
Close
Noticed an error?
If you've noticed an error in this article please click here to report it so we can fix it.

ONE of the main Sheffiel Manchester roads could clo if a Department of Transpc proposal is adopted.

The A57 Snake Pass roui the shortest way from Sh( field to Manchester, has be studied by a team of Peak Pa planners, Department Transport officials and loc highway authorities. ThE report predicts that traff across the Peak Distri National Park will increase 1 50 per cent in the next : years, and that goods vehic traffic will rise by 25 per cen: But the A57 Snake Pass always the first road in ti area to suffer from the wint weather and can becon impassable very quick during a snowfall. The repc suggests that the road shou be permanently closed, whi other roads would I improved to cope with the i creased traffic.

The "minor improvemeni mentioned in the report f these alternative roads inclui the construction of a crawl lane for heavy lorries on tl main commercial vehic route across the Peak Distrii the A616 and the A628 throui Woodhead. Passing places ( the A6 between Matlock ax Buxton are also proposed.

The closure of the A: Snake Pass route would affe long-distance traffic mo than local traffic. A Ministry Transport survey showed th only 200 vehicles a day we making local journeys. T1 idea of building a new Penni] motorway similar to the MC but linking Sheffield ar Manchester, was dismissed 1 the report.

The proposals are being se: to local councils and inte

THE Department of Transpc has decided on a new and mo direct route from the Crew, Nantwich area to the M using the A52 Barthoml( link.