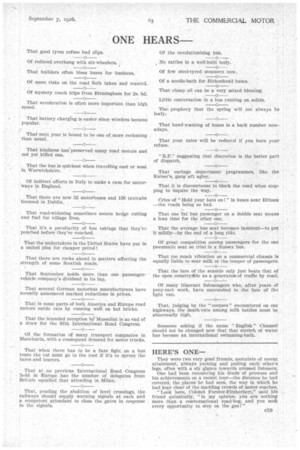 Page 41, 7th September 1926 — ONE HEARS
Close
Noticed an error?
If you've noticed an error in this article please click here to report it so we can fix it.

Of reduced overhang with six-wheelers , That builders often bless buses for business.

Of more risks on the road fioth taken and wanted.

Of mystery coach trips from Birmingham for 2s. 6d.

That acceleration is often more important than high speed.

' That battery charging is easier since wireless became popular.

That next year is bound to be one of more reckOning than usual.

That kindness has`preserved many road motors and not yet killed one.

That the bus is quickest when travelling east or west in Warwickshire.

Of indirect efforts in Italy to make a case for motor-ways in England.

That there are now 52 motorbuses and 156 taxicabs licensed in Dublin.

That it's a peculiarity of bus takings that they're pouched before they're vouched.

That the undertakers in the United States have put in a united plea for cheaper petrol!

That there are rocks ahead in matters affecting the strength of some Scottish roads.

That September holds more than one passengervehicle company's dividend in its lap.

That in some parts of both America and Europe road motors outdo eats by running well on hot bricks.

That the intended reception loy' Mussolini is no end of ,a draw for the fifth International Road Congress.

Of the formation of many transport companies in Manchuria, with a consequent demand for motor trucks.

That when there has to be a fare fight on a bus route the cut must go to the root if it's to uproot the tares and tearers.

That at no previous International Road Congress 'held in Europe has the number of delegates from Britain equalled that attending in Milan.

That, pending the abolition of level crossings, the railways should supply warning signals at each and a competent attendant to close the gates in response to the signals. Of the revolutionizing bus.

No rattles in a well-built body.

Of a needle-bath for Birkenhead buses.

That cheap oil can be a very mixed blessing.

Little conversation in a bus running on solids.

The prophecy that the spring will not always be leafy. _ That hand-washing of buses is a back number nowadays.

That your rates will be reduced if you burn your refuse.

" RP." suggesting that discretion. is the better part of dispatch.

That cartage department programmes, like the Kaiser's, gang aft agley.

That it is discourteous to block the road when stopping to inquire the way.

Cries of "Hold your hats on!" in buses near Elthatn —the roads being so bad.

That one fat bus passenger on a double seat means a lean time for the other one.

That the average bus seat becomes insistent—to put it mildly—by the end of a long ride.

Of great competition among passengers for the one pneumatic seat On trial in a Sussex bus.

That too much vibration on a commercial chassis is equally liable to sour milk or the temper of passengers.

That the lure of the seaside only just beats that of the open countryside as a generator, of traffic by road.

Of many itinerant fishmongers who, after years of pony-cart work, have succumbed to the lure of the light van.

That, judging by tile " corpses " encountered on our highways, the death-rate among milk bottles must be abnormally high.

Someone asking if the name " English " Channel should not be changed now that that stretch of water has become an international swimming-bath.