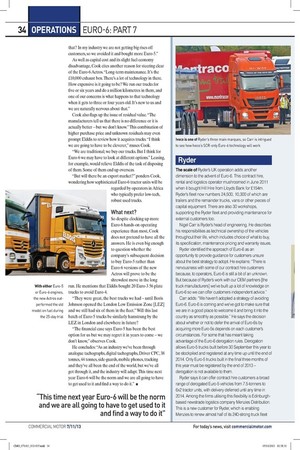 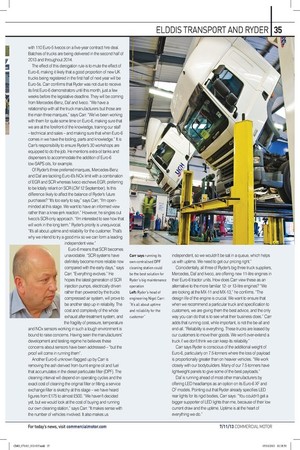 Page 26, 7th November 2013 — Ryder
Close
Noticed an error?
If you've noticed an error in this article please click here to report it so we can fix it.

The scale of Ryder's UK operation adds another dimension to the advent of Euro-6. This contract hire, rental and logistics operator mushroomed in June 2011 when it bought Hill Hire from Lloyds Bank for £154m. Ryder's fleet now numbers 24,500, 10,300 of which are trailers and the remainder trucks, vans or other pieces of capital equipment. There are also 30 workshops, supporting the Ryder fleet and providing maintenance for external customers too.

Nigel Carr is Ryder's head of engineering. He describes his responsibilities as technical ownership of the vehicles throughout their life, which includes choice of what to buy, its specification, maintenance pricing and warranty issues.

Ryder identified the approach of Euro-6 as an opportunity to provide guidance for customers unsure about the best strategy to adopt. He explains: "There is nervousness with some of our contract hire customers because, to operators, Euro-6 is still a bit of an unknown. But because of Ryder's work with our OEM partners [the truck manufacturers] we've built up a lot of knowledge on Euro-6 so we can offer customers independent advice."

Carr adds: "We haven't adopted a strategy of avoiding Euro-6. Euro-6 is coming and we've got to make sure that we are in a good place to welcome it and bring it into the country as smoothly as possible." He says the decision about whether or not to defer the arrival of Euro-6s by acquiring more Euro-5s depends on each customer's circumstances. For some that has meant taking advantage of the Euro-6 derogation rules. Derogation allows Euro-5 trucks built before 30 September this year to be stockpiled and registered at any time up until the end of 2014. Only Euro-5 trucks built in the final three months of this year must be registered by the end of 2013 — derogation is not available to them. Ryder says it can offer contract hire customers a broad range of derogated Euro-5 vehicles from 7.5-tonners to 6x2 tractor units, with delivery deferred until any time in 2014. Among the firms utilising this flexibility is Edinburghbased newstrade logistics company Menzies Distribution. This is a new customer for Ryder, which is enabling Menzies to renew almost half of its 240-strong truck fleet

with 110 Euro-5 Ivecos on a five-year contract hire deal. Batches of trucks are being delivered in the second half of 2013 and throughout 2014.

The effect of this derogation rule is to mute the effect of Euro-6, making it likely that a good proportion of new UK trucks being registered in the first half of next year will be Euro-5s. Carr confirms that Ryder was not due to receive its first Euro-6 demonstrators until this month, just a few weeks before the legislative deadline. They will be coming from Mercedes-Benz, Daf and Iveco. "We have a relationship with all the truck manufacturers but those are the main three marques," says Carr. "We've been working with them for quite some time on Euro-6, making sure that we are at the forefront of the knowledge, training our staff — technical and sales — and making sure that when Euro-6 comes in we have the tooling, parts and knowledge." It is Carr's responsibility to ensure Ryder's 30 workshops are equipped to do the job. He mentions extra oil tanks and dispensers to accommodate the addition of Euro-6 low-SAPS oils, for example. Of Ryder's three preferred marques, Mercedes-Benz and Daf are tackling Euro-6's NOx limit with a combination of EGR and SCR whereas Iveco eschews EGR, preferring to be totally reliant on SCR (CM 12 September). Is this difference likely to affect the balance of Ryder's future purchases? "It's too early to say," says Carr, "I'm openminded at this stage. We want to have an informed view rather than a knee-jerk reaction." However, he singles out Iveco's SCR-only approach. "I'm interested to see how that will work in the long term." Ryder's priority is unequivocal. "It's all about uptime and reliability for the customer. That's why we intend to try a good mix so we can form a leading

independent view." Euro-6 means that SCR becomes unavoidable. "SCR systems have definitely become more reliable now compared with the early days," says Carr. "Everything evolves." He hopes the latest generation of SCR injection pumps, electrically driven rather than powered by the trucks compressed air system, will prove to be another step up in reliability. The cost and complexity of the whole exhaust after-treatment system, and the fragility of pressure, temperature

and NOx sensors working in such a tough environment is bound to raise concerns. Having seen the manufacturers' development and testing regime he believes these concerns about sensors have been addressed — "but the proof will come in running them". Another Euro-6 unknown flagged up by Carr is removing the ash derived from burnt engine oil and fuel that accumulates in the diesel particulate filter (DPF). The cleaning interval will depend on operating cycles and the exact cost of cleaning the original filter or fitting a service exchange filter is sketchy at this stage — we have heard figures from £175 to almost £500. "We haven't decided yet, but we would look at the cost of buying and running our own cleaning station," says Carr. "It makes sense with the number of vehicles involved. It also makes us

independent, so we wouldn't be sat in a queue, which helps us with uptime. We need to get our pricing right."

Coincidentally, all three of Ryder's big three truck suppliers, Mercedes, Daf and Iveco, are offering new 11-litre engines in their Euro-6 tractor units. How does Carr view these as an alternative to the more familiar 12or 13-litre engines? "We are looking at the MX-11 and MX-13," he confirms. "The design life of the engine is crucial. We want to ensure that when we recommend a particular truck and specification to customers, we are giving them the best advice, and the only way you can do that is to see what their business does." Carr adds that running cost, while important, is not the be-all and end-all. "Reliability is everything. These trucks are leased by our customers to move their goods. We won't over-extend a truck if we don't think we can keep its reliability."

Carr says Ryder is conscious of the additional weight of Euro-6, particularly on 7.5-tonners where the loss of payload is proportionally greater than on heavier vehicles. "We work closely with our bodybuilders. Many of our 7.5-tonners have lightweight panels to give some of the best payloads."

Daf is running ahead of most other manufacturers by offering LED headlamps as an option on its Euro-6 XF and CF models. Pointing out that Ryder already specifies LED rear lights for its rigid bodies, Carr says: "You couldn't get a bigger supporter of LED lights than me, because of their low current draw and the uptime. Uptime is at the heart of everything we do."