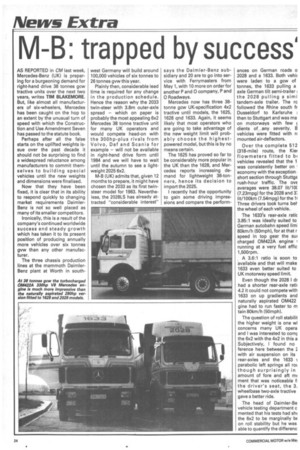 Page 26, 7th May 1983 — M-B: trapped by success'
Close
Noticed an error?
If you've noticed an error in this article please click here to report it so we can fix it.
Keywords : Articulated Vehicles, Semi-trailer Truck, Mercedes-benz

AS REPORTED in CM last week, Mercedes-Benz (UK) is preparing for a burgeoning demand for right-hand drive 38 tonnes gcw tractive units over the next two years, writes TIM BLAKEMORE. But, like almost all manufacturers of six-wheelers, Mercedes has been caught on the hop to an extent by the unusual turn of speed with which the Construction and Use Amendment Seven has passed to the statute book.

Perhaps after all the false starts on the uplifted weights issue over the past decade it should not be surprising to find a widespread reluctance among manufacturers to commit themselves to building special vehicles until the new weights and dimensions were finalised.

Now that they have been fixed, it is clear that in its ability to respond quickly to changing market requirements DaimlerBenz is not so well placed as many of its smaller competitors.

Ironically, this is a result of the company's continued worldwide success and steady growth which has taken it to its present position of producing annually more vehicles over six tonnes gvw than any other manufacturer.

The three chassis production lines at the mammoth DaimlerBenz plant at Worth in south west Germany will build around 100,000 vehicles of six tonnes to 26 tonnes gvw this year.

Plainly then, considerable lead time is required for any change in the production schedule. Hence the reason why the 2033 twin-steer with 3.8m outer-axle spread — which on paper is probably the most appealing 6x2 Mercedes 38 tonne tractive unit for many UK operators and would compete head-on with the 30 Ohp-plus rivals from Volvo, Oaf and Scania for example — will not be available in right-Iland drive form until 1984 and we will have to wait until the autumn to see a lightweight 2025 6x2.

M-B (UK) admits that, given 12 months to prepare, it might have chosen the 2033 as its first twinsteer model for 1983. Nevertheless, the 2028LS has already attracted "considerable interest" says the Daimler-Benz subsidiary and 20 are to go into service with Ferrymasters from May 1, with 10 more on order for another P and 0 company, P and 0 Roadways.

Mercedes now has three 38tonne gcw UK-specification 4x2 tractive until models, the 1625, 1628 qnd 1633. Again, it seems likely that most operators who are going to take advantage of the new weight limit will probably choose the highestpowered model, but this is by no means certain.

The 1625 has proved so far to be considerably more popular in the UK than the 1628, and Mercedes reports increasing demand for lightweight 38-tonners, hence its decision to import the 2025.

ances on German roads o 2028 and a 1633. Both vehi< were laden to a gcw of tonnes, the 1633 pulling a axle German tilt semi-trailer i the 2028 pulling a simi tandem-axle trailer. The no followed the Rhine south fr Dusseldorf to Karlsruhe I then to Stuttgart and was ma on motorways with few dients of any severity. B vehicles were fitted with I.< mounted air-deflectors.

Over the complete 512 (318-mile) route, the Kier flowmeters fitted to b< vehicles revealed that the 1 was consistently better on economy with the exception short section through Stuttge rush-hour traffic. The OVE averages were 38.07 lit/10( (7.23mpg) for the 2028 and 3] lit/100km (7.54mpg) for the 11 Three drivers took turns bet the wheel of each vehicle.

A 3.6:1 ratio is soon to available and that will make 1633 even better suited to UK motorway speed limit.

The question of roll stabilit the higher weight is one wl concerns many UK opera and I was interested to comi the 6x2 with the 4x2 in this a Subjectively, I found no ference here between the :2 with air suspension on its rear-axles and the 1633 1 parabolic left springs all rot. though surprisingly in amount of fore and aft nu ment that was noticeable fi the driver's seat, the 3. wheelbase two-axle tractive gave a better ride.