N.R.T.F. to Fight Minister in Court A CTION in the Courts 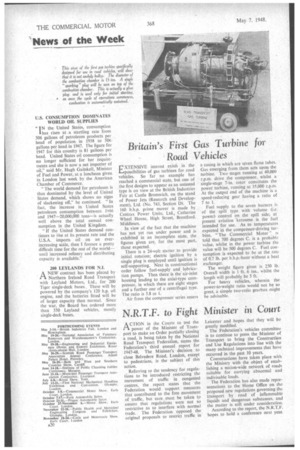 Page 22, 7th May 1948 — N.R.T.F. to Fight Minister in Court A CTION in the Courts
Close
Noticed an error?
If you've noticed an error in this article please click here to report it so we can fix it.

to test the power of the Minister of Transport to make an Order partially closing a road, is being taken by the National Road Transport Federation, states the Federation's third annual report for 1947-48. The Minister's decision to close Belvedere Road, London, except to pedestrians, is the subject of this action.

Referring to the tendency for regulations to be introduced restricting the movement of traffic in congested centres, the report states that the Federation would support measures that contributed to the free movement of traffic, but care.must be taken to ensure that regulations were not so restrictive as to interfere with normal trade. The Federation opposed the original proposals to restrict traffic in Leicester and hopes that they will be greatly modified.

The Federation's vehicles committee is to continue to press the Minister of Transport to bring the Construction and Use Regulations into line with the Many technical improvements that have occurred in the past 10 years.

Conversations have taken place with the Ministry with the object of establishing a nation-wide network of roads suitable for carrying abnormal and indivisable loads.

The Federation has also made representations to the Home Office on the proposed new regulations governing the transport by road of inflammable liquids and dangerous substances, and the matter is still under consideration.

According to the report, the N.R.T.E. hopes to hold a conference next year.