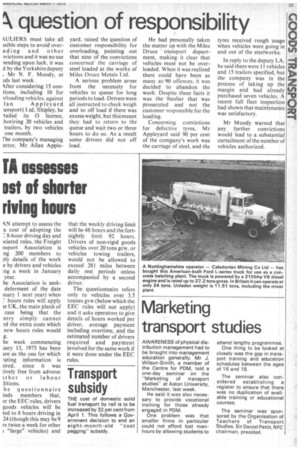 Page 27, 7th March 1975 — k question of responsibility
Close
Noticed an error?
If you've noticed an error in this article please click here to report it so we can fix it.
Keywords : Carriage, Horse Driving, Trucks, Technology / Internet, Business / Finance

WLIERS must take all ssible steps to avoid overading and other wictions and it was no use lending upon luck, it was d by the Yorkshire deputy Mr N. F. Moody, at tds last week.

kfter considering 15 contions, including 10 for Tloading vehicles, against lan Appleyard .ansport) Ltd, Shipley, he -tailed its 0 licence, horizing 20 vehicles and trailers, by two vehicles one month.

rhe company's managing ector, Mr Allan Apple yard, raised the question of customer responsibility for overloading, pointing out that nine of the convictions concerned ' the carriage of steel loaded at the works of Miles Druce Metals Ltd.

A serious problem arose from the necessity for vehicles to queue for long periods to load. Drivers were all instructed to check weigh and to off load if there was excess weight, but this meant they had to return to the queue and wait two or three hours to do so. As a result some drivers did not off load. He had personally taken the matter up with the Miles Druce transport department, making it clear that vehicles must not be overloaded. When it was realized there could have been as many as 90 offences, it was decided to abandon the work. Despite these facts it was the haulier that was prosecuted and not the customer responsible for the loading.

Concerning convictions for defective tyres, Mr Appleyard said 90 per cent of the company's work was the carriage of steel, and the tyres received rough usage when vehicles were going in and out of the steelworks.

In reply to the deputy LA, he said there were 11 vehicles and 15 trailers specified, but the company was in the. process of taking up the margin and had already purchased seven vehicles. A recent full fleet inspection had shown that maintenance was satisfactory.

Mr Moody warned that any, further convictions would lead to a substantial curtailment of the number of vehicles authorized.