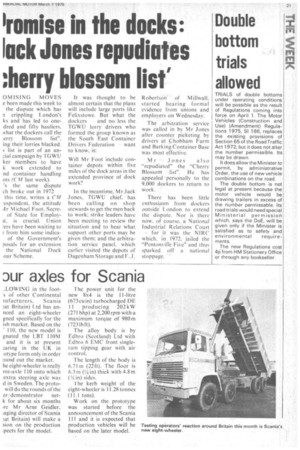 Page 23, 7th March 1975 — 'remise in the docks lack Jones repudiates
Close
Noticed an error?
If you've noticed an error in this article please click here to report it so we can fix it.
Keywords : Stevedore, Transport And General Workers' Union, Pentonville Five, Dockers, United Kingdom

OMISING MOVES e been made this week to the dispute which has n crippling London's ks and has led to onedred and fifty hauliers. Nhat the dockers call the erry Blossom list", ing their lorries blacked. i; list is part of an unzial campaign by TGWU ker members to have k work extended to nd container handling ots (CM last week).

's the same dispute ch broke out in 1972 this time, writes a CM -espondent, the attitude .4r Michael Foot, Secreof State for Employit, is crucial. Union lers have been waiting to r from him some indica of the Government's posals for an extension the National Dock our Scheme. It was thought to be almost certain that the plans will include large ports like Felixstowe. But what the dockers and no less the TGWU lorry drivers who formed the group known as the South East Container Drivers Federation -want to know, is: Will Mr Foot include container depots within five miles of the dock areas in the extended province of dock work?

In the meantime. M r _lack Jones, TGWU chief, has been calling on shop stewards to get the men back to work: strike leaders have been meeting to review the situation and to hear what support other ports may be given them; and the arbitration service panel, which earlier visited the depots of Dagenham Storage and F. J. Robertson of Millwall, started hearing formal evidence from unions and employers on Wednesday.

The arbitration service was called in by Mr Jones after counter picketing by drivers at chobham Farm and Barking Container Base was most effective.

Mr • Jones also "repudiated" the "Cherry Blossom • list". He has appealed 'personally to the 9,000 dockers to return to work.

There has been little enthusiasm from dockers outside London to extend the dispute. Nor is there now, of course, a National Industrial Relations Court for it was the NI RC which, in 1972, jailed the "Pentonville Five" and thus sparked off a national stoppage.