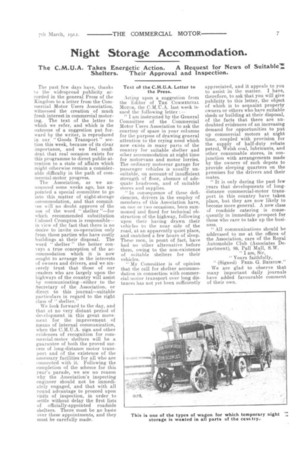 Page 7, 7th March 1912 — Night Storage Accommodation.
Close
Noticed an error?
If you've noticed an error in this article please click here to report it so we can fix it.
Keywords : Recreational Vehicle, Sociolinguistics

The C.M.U.A. Takes Energetic Action. A Request for News of SuitableM Shelters. Their Approval and Inspection.

The past few days have, thanks to the widespread publicity accorded in the general Press of the Kingdom to a letter from the Commercial Motor Users Association, witnessed the creation of much fresh interest in commercial motoring. The text of the letter to which we refer, and which is the outcome of a suggestion put forward by the writer, is reproduced in our "Goods Transport" section this week, because of its clear importance, and we feel confident that real occasion exists for this programme to direct public attention to a state of affairs which might otherwise remain a considerable difficulty in the path of commercial-motor progress.

The Association, as we announced some weeks ago, has appointed a special committee to go into this matter of night-storage accommodation, and that committee will no doubt approve of the use of the word " shelter "—for which recommended substitution Colonel Crompton is responsible— in view of the fact that there is no desire to invite co-operation only from those parties who have costly buildings at their disposal. The word " shelter " the better conveys a true conception of the accommodation which it is now sought to arrange in the interests of owners and drivers, and we sincerely trust that those of our readers who are largely upon the highways of the country will assist by communicating—either to the Secretary of the Association, or direct to this journal—suitable particulars in regard to the right class of " shelter."

We look forward to the day, and that at no very distant period of development in this great movement for the improvement of means of internal communication, when the C.M.U.A. sign and other evidences of recognition for commercial-motor shelters will be a guarantee of both the proved success of long-distance motor transport and of the existence of the necessary facilities for all who are connected with it. Following the completion of the scheme for this year's parade, we see no reason why the Association's inspecting engineer should not be immediately engaged, and that with all round advantage to proceed upon visits of inspection, in order to mettle without delay the first lists of officially-appointed roadside shelters. There must be no haste over these appointments, and they must be carefully made. Acting upon a suggestion from the Editor of THE CORHERCTAL MOTOR, the C.M.U.A. last week issued the following letter :— " I am instructed by the General Committee of the Commercial Motor Users Association to ask the courtesy of space in your columns for the purpose of drawing general attention to the crying need which now exists in many parts of the country for suitable shelter and other accommodation at night time for motorvans and motor lorries. The ordinary motorcar garage for passenger vehicles is usually unsuitable, on account. of insufficient strength of floor, absence of adequate headroom, and of suitable stores and supplies. "in consequence of these deficiencies, drivers in the employ of members of this Association have, on one or two occasions, been summoned and fined for technical obstruction of the highway, following upon their having drawn their vehicles to the near side of the road, at an apparently quiet place, and snatched a few hours of sleep. These men, in point of fact, have had no other alternative before them, owing to the non-existence of suitable shelters for their vehicles.

"My Committee is of opinion that the call for shelter accommodation in connection with commercial-motor transport over Ions distances has not yet been sufficiently appreciated, and it appeals to you to assist in the matter. I have, therefore, to ask that you will give publicity to this letter, the object of which is to acquaint property owners or others who have suitable sheds or building at their disposal, of the facts that there are undoubted evidences of an increasing demand for opportunities to put up commercial motors at night time, coupled with provision for the supply of half-duty rebate petrol, Welsh coal, lubricants, and other consumable stores, in conjunction with arrangements made by the owners of such depots to provide sleeping quarters on the premises for the drivers and their mates.

" It is only during the past few years that developments of longdistance commercial-motor transport in this country have taken place, but they are now likely to become more general. A new class of roadside catering is consequently in immediate prospect for those who care to take up the business.

"All communications should be addressed to me at the offices of the Association, care of the Royal Automobile Club (Associates Department), 89, Pall Mall, S.W. " I am, Sir, "Yours faithfully, "(Signed) FRED. G. BRISTOW."

We are glad to observe that many important daily journals have added favourable comment of their own.